Two of the last three league stage games for KKR will be against the Mumbai Indians.

The Kolkata Knight Riders (KKR) has often been tagged as one of the stronger camps in the Indian Premier League (IPL) history. However, when they took the field last season, under the new leadership of Dinesh Karthik, there were some reservations about their mettle in the competition. The team defied all odds and came up with great performances to keep their fans interested. It was rather unfortunate for them to crash out of the race to the ultimate glory with a few close games not going their way.

This season, the team is rather well settled compared to what the new-look side had at their disposal last year. Also, their captain looks calmer on the outlook and seems to have a settled plan to execute in IPL 2019. They have been dented with a few exclusions even before the tournament has commenced, but they certainly do not have any dearth of talent. Their spin bowling holds the key for them as Sunil Narine, Kuldeep Yadav, and Piyush Chawla are set to spin their web this season.

The Kolkata Knight Riders will begin their campaign at their fortress, the Eden Gardens, Kolkata. They will be hosting the Sunrisers Hyderabad (SRH) in the second match of the season. It will be a day affair between the two sides. The Knight Riders will then play the Kings XI Punjab (KXIP) at the same venue before heading to Delhi for their first away match of the season.

They will play three more away matches following this game, against Royal Challengers Bangalore, Rajasthan Royals, and Chennai Super Kings, before heading back to Kolkata to host the Delhi Capitals in the second clash between these two sides in the season.

The last home match for KKR would be against the Mumbai Indians on April 28 and it is tipped to be a marquee clash. This will be followed up by two more away matches in the league stages for KKR as they will face off against Kings XI Punjab and then lock horns with the Mumbai Indians again in the reverse fixture on May 5. Again, no points for guessing – another marquee clash!

Here is the complete league stage schedule of the Kolkata Knight Riders: 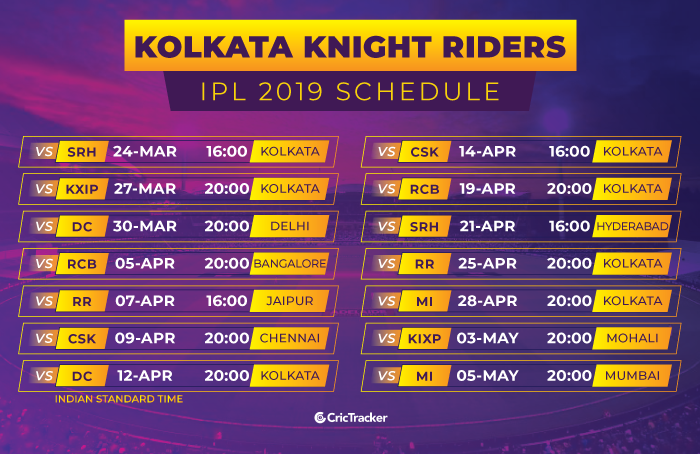