RCB's four out of their last five matches in the league stages would be home matches in Bengaluru.

Despite being one of the most popular teams in the history of the IPL, the Royal Challengers Bangalore have perennially struggled to live up to their expectations. The 2016 edition of the tournament was perhaps an exception for them when a Virat Kohli juggernaut had helped them make it to the finals. Barring that exceptional run in the season, they have largely faced issues with their combinations on the field and on paper as well.

They have the likes of Virat Kohli and AB de Villiers in their lineup – who are arguably the top two batters in the format. However, they have been tagged as an incompetent unit when it comes to their bowling attack. The story might not ideally be too different for them this season as well, unless the bowlers step up and help their batters save the day for the team. As skipper Kohli has cited, the team has failed to win the IPL only due to their blips in decision making.

Despite their poor run of form across several seasons, the Royal Challengers Bangalore fan base has hardly faced any dent. The fans continue to show their support to the team and come to the M Chinnaswamy Stadium in large numbers. In IPL 2019, the team RCB will play their first game against the Chennai Super Kings in Chennai in the season opener.

They will have a good five-day break before they land in Bengaluru to play their first home game of the season against the Mumbai Indians. RCB’s schedule for the league stages sees the major disparity in the number of games they play at home in the first half of the league stages, as compared to the final half.

While the team would tour initially, they will get four out of their last 5 matches of the season to be played in Bengaluru. The last league game for RCB would be against the Sunrisers Hyderabad on May 4. The last away game for the Virat Kohli-led side will be against the Delhi Capitals on April 28.

Here is the complete league stage schedule of the Royal Challengers Bangalore: 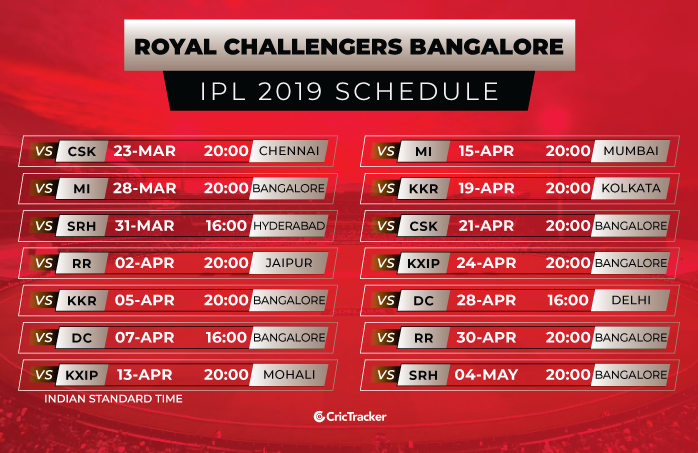