Varun Chakravarthy and Sam Curran were two of their top buys.

After starting extremely well, Kings XI Punjab’s (KXIP) Indian Premier League (IPL) campaign didn’t go as expected earlier this year. Following the debacle, they overhauled the coaching staff and released a handful of players from the squad as well. Mike Hesson has been appointed the head coach now and will most probably continue to work with Ravi Ashwin who was the leader of the pack in the previous season.

Going into the auction, they had a decent amount of purse available which is Rs 36.20 Crores and will be looking to rebuild the whole squad. They had only 10 players in the squad and were expected to go bonkers behind most of the players. The franchise had the luxury of picking as many as 15 players in which only three overseas slots are available.

Varun Chakravarthy and Sam Curran were the top two buys for them as the franchise shelled out a whopping amount of Rs 8.4 crores and Rs 7.2 crore respectively. While Mohammed Shami was also one of the expensive buys for them, KXIP’s auction crew which included the coach Mike Hesson were also smart enough to make bargain buys.

They concentrated on utility players like Moises Henriques, Hardus Viljoen while picking two specialist wicket-keepers in Nicholas Pooran and Prabhsimran Singh both of whom are youngsters. As far as the remaining players are concerned, they preferred to go with the uncapped players likes Darshan Nalkande, Sarfaraz Khan, Arshdeep Singh, Agnivesh Ayachi, Harpreet Brar and M Ashwin.

Here’s the full squad of Kings XI Punjab for the IPL 2019: 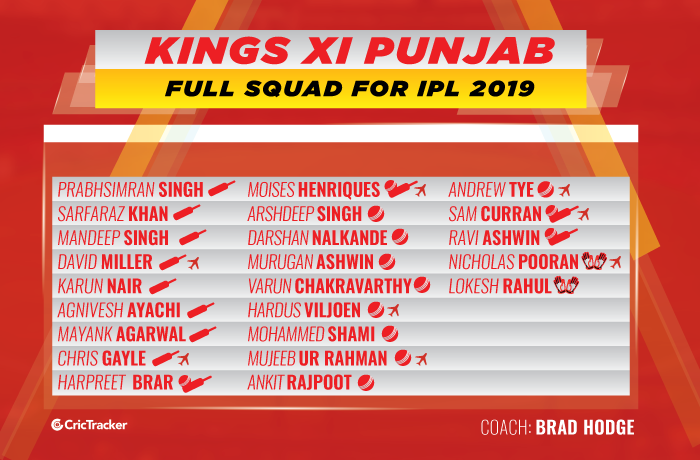