Both teams are still searching for their first win of this edition's IPL.

The Indian Premier League (IPL) is well and truly on its way, but two teams- Royal Challengers Bangalore (RCB) and Rajasthan Royals- are yet to open their account. Both teams lost their first three encounters and are languishing at the bottom of the points table. The Challengers are the cellar dwellers of the event with the worst Net Run Rate after the shambolic defeat against Sunrisers Hyderabad (SRH).

Virat Kohli and Co were outplayed by the Sunrisers in all three departments. On the other hand, the Royals have been more competitive, yet haven’t been able to get a victory under their belt. In their last match against the Chennai Super Kings (CSK) at the MA Chidambaram Stadium in Chennai, the Ajinkya Rahane-led team got their opponents by the scruff of its neck, but couldn’t get over the finishing line.

Both the Challengers and the Royals are now scheduled to lock horns at the Sawai Mansingh Stadium in Jaipur and would be hoping to get on the board. As far as numbers are concerned, RCB have won three matches in Rajasthan’s fortress even as the hosts have won as many games. Even on the head-to-head count, there’s hardly any difference. A cracker of a contest can be expected tomorrow.

The Royals may bring in Ashton Turner in place of Steve Smith, who hasn’t quite looked his fluent best in three matches. Varun Aaron may place in place of an out-of-form Jaydev Unadkat. The onus would be on Jos Buttler and Ajinkya Rahane to give the team a decent start. A lot also depends on Ben Stokes. Their batting has a fair amount of depth. Archer, Kulkarni, and Gopal are the in-form bowlers.

Marcus Stoinis may be roped in place of Colin de Grandhomme. He will open the batting with Parthiv Patel. Kohli and AB de Villiers will bat at number three and four respectively. Moeen Ali will come in the middle order and he would be needed with the ball. The team may also drop the 16-year-old Prayas Ray Barman and bring in Washington Sundar. Nathan Coulter-Nile may replace Shimron Hetmyer. 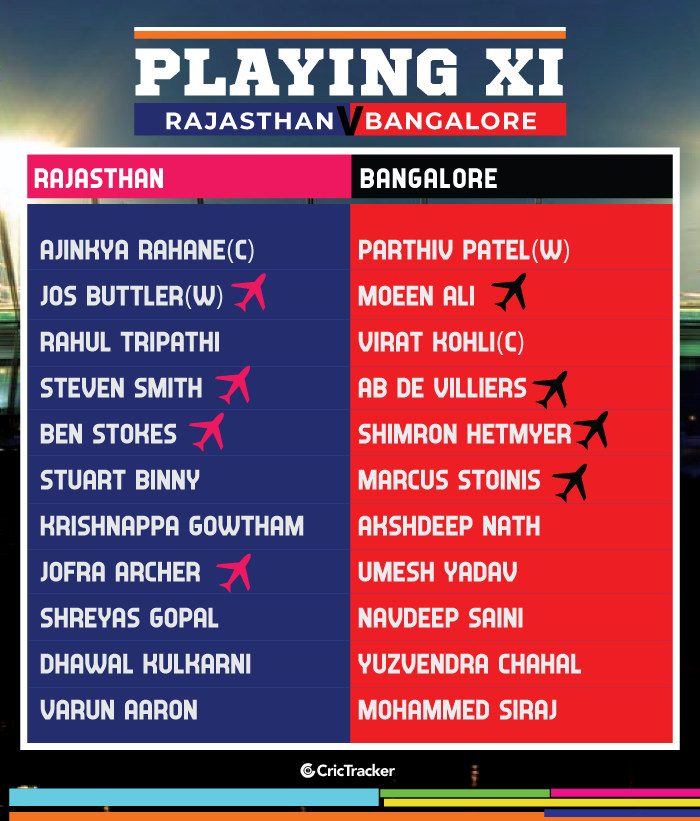 The Kerala batsman started this IPL with a decent knock of 30 against Kings XI Punjab. He churned out a superlative century against the Sunrisers that earned him accolades from every nook and corner of the cricketing fraternity. However, last time around, he got out cheaply to fast bowler Deepak Chahar after scoring only eight runs. The youngster would have a chance to make amends tomorrow.

The RCB team hasn’t quite had the best of tournaments thus far. He has got out in single-digit scores on a couple of occasions. Against the Mumbai Indians (MI), he had a chance of getting his team over the line after scoring 46, but he got out to Jasprit Bumrah. Kohli is the fulcrum of the Challengers’ setup and his team won’t want another failure from their prolific run-scorer.

At the Sawai Mansingh Stadium