Chennai lost its first match of this season.

The ‘El Classico’ between Mumbai Indians (MI) and Chennai Super Kings (CSK) ended up with the hosts winning it comfortably. Hardik Pandya performed brilliantly on the night and was backed adequately by the other players. The Mumbai Indians won the match by 37 runs to hand over the visitors their first loss of this season.

Suryakumar Yadav and Kieron Pollard had an important contribution in this win. Krunal Pandya and Lasith Malinga also played their part as MI registered their second win of this season. Rohit Sharma has to be commended for his captaincy in this game. He made some brilliant bowling changes and was spot on with his fieldsets. Chennai’s bowling went terribly wrong in this match and they have a few things to look at before they play their next game.

The Mumbai Indians, after being put into bat first, didn’t get off to the best of starts in the match. Quinton de Kock holed out to the square leg fielder early in his innings. The left-hander only could score 4 off 7 balls and the skipper Rohit didn’t do well either. The 31-year-old crawled to 13 off 18 balls before Ravindra Jadeja found his edge which was caught comfortably by MS Dhoni.

Yuvraj Singh also got out soon before Surya and Krunal built up a good partnership. The duo added 62 runs in relatively quick time. While the former scored 59, his partner scored 42. They got out in consecutive overs towards the death and Mumbai was still not in the best of positions at that stage.

Pollard and Hardik Pandya joined hands together to finish things off on a high for MI. While the Indian all-rounder was unbeaten on 25 from 8 balls, the Caribbean cricketer smashed 17 off 7 balls. 29 runs were scored off the last over from DJ Bravo and 88 came off the last six overs. MI finished things off on a massive high with a score of 170/5 on the board.

CSK batsmen were never in the chase

CSK got off to a poor start in the chase. After scoring just 6 runs, the visitors lost both its openers. Suresh Raina tried to take the counterattack to the opposition. He hit two fours and one six during his brief stay in the middle. But, Kieron Pollard pulled off an unbelievable stunner to dismiss the left-hander for 16 runs.

MS Dhoni and Kedar Jadhav then got together in the middle and built a nice, little partnership. But the required run was always creeping up and there was immense pressure on MSD as he ate up a lot of deliveries early on. He tried to take the attack to Hardik Pandya but was dismissed for 12 off 21 balls, the first time in this IPL. Jadeja also got out in the same over subjecting the team to further stress.

From this stage, the visitors never managed to recover. After crawling to a 54-ball 58, Kedar Jadhav got out. DJ Bravo also failed to repeat last year’s heroics putting curtains to the last ray of hope. Pandya picked up three wickets with the ball as well and was exceptional as CSK could only get 133/8 in 20 overs.

Man of the Match: Hardik Pandya 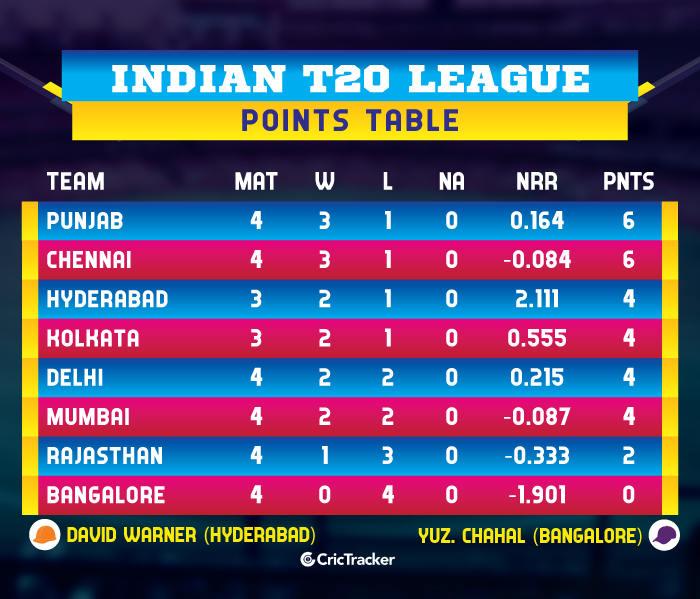