The Sunrisers have lost only one match against DC at the Kotla.

The Delhi Capitals (DC) have been promising but suffered a massive collapse in their previous encounter against Kings XI Punjab (KXIP) where Sam Curran ripped the heart out of them with a hat-trick. The team, led by Shreyas Iyer, is in the middle of the points table in this edition’s Indian Premier League (IPL) with two wins and as many losses. Their next encounter is against the Sunrsiers Hyderabad (SRH).

The game is scheduled to be played at the Feroz Shah Kotla in New Delhi, where SRH have come out trumps against the Capitals three times out of four instances. Even as numbers favour the visitors, DC have the potential to stage a comeback. The Sunrisers must be high on confidence after a couple of resounding shows against the Rajasthan Royals (RR) and the Royal Challengers Bangalore (RCB).

The 16th game of the IPL between DC and SRH will be hosted by the Feroz Shah Kotla in Delhi.

According to Accuweather, the temperature will hover around the 30-degree mark and the humidity will be around the 34 percent mark. There will be an effect of dew throughout the game.

(Will be updated if there’s any) 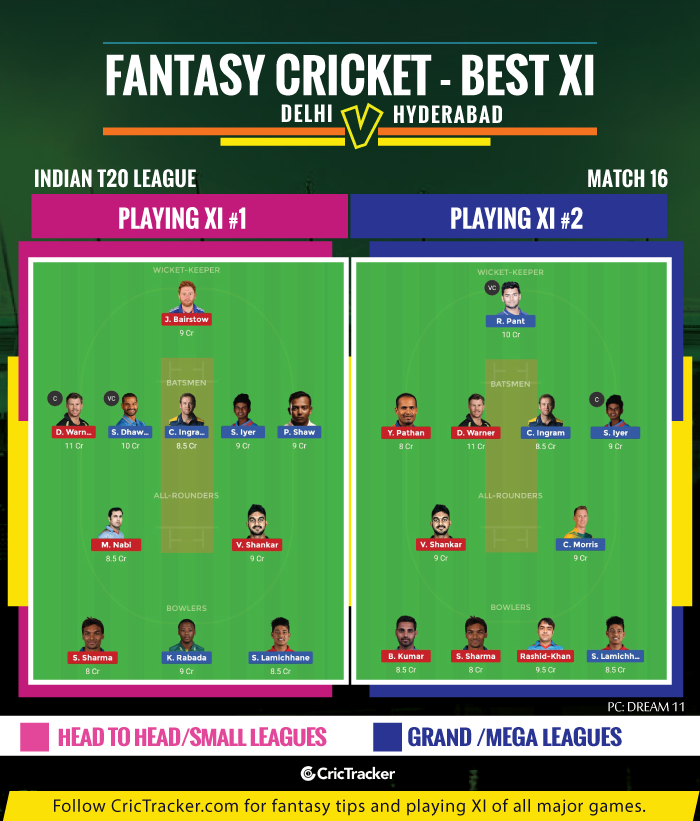 If Kane Williamson returns, then Mohammad Nabi may have to make way for the Black Cap.

The prediction is for the Sunrisers to win the match.