What just happened at the Chinnaswamy?

The Kolkata Knight Riders stunned the Royal Challengers Bangalore at the Chinnaswamy. It was the man again, Andre Russell, who did the job for the ‘Men in Purple and Gold’ in a steep chase. Dre Russ scored an unbeaten 48 off just 13 balls and made the impossible possible for his team.

RCB now lost five games on a trot and are nearly out of the playoff contention. They need to win at least seven or eight of their remaining games if they are to get anywhere close. However, that seems highly unlikely for Virat Kohli and co. With this victory, the Kolkata Knight Riders rose up to the second spot on the points table just behind the Sunrisers Hyderabad.

Virat Kohli and AB de Villiers do a Jai-Veeru

The Royal Challengers Bangalore were put into bat first in this game by KKR. Virat Kohli continued to open the innings with wicket-keeper batsman Parthiv Patel. The duo added 64 runs in 7.5 overs before Parthiv walked back to the pavilion after scoring a 24-ball 25. Then, the skipper joined hands with AB de Villiers and built up a wonderful partnership. They took the attack to the bowlers and scored at a very good pace.

While the 30-year-old scored 84 off 49 balls, AB de Villiers hit 63 off just 32 balls. Kohli missed out on a well-deserved century as he hit one straight back into the hands of Kuldeep Yadav. The duo hit fourteen fours and six sixes combined and added 108 together. Marcus Stoinis did well for the home team and hit an unbeaten 13-ball 28 towards the end and helped RCB get past the 200-run mark. They finished with 205/3 in 20 overs which was quite a good total at the halfway mark.

Andre Russell is the man, once again

In the chase, KKR had a decent start. Sunil Narine got out for 10 runs. However, Chris Lynn and Robin Uthappa put things back on track. The Australian batsman played his best knock of this season thus far. He smashed 43 off 31 balls and also hit one out of the park. On the other end, it was all class watching Robin Uthappa bat. He timed the ball beautifully and played a handy knock of 33 off 25 balls.

But, Pawan Negi turned things around by dismissing both these men in quick successions. In the overs between 10 and 15, Nitish Rana and Dinesh Karthik struggled to get the runs. They failed to get any boundaries and the required run rate rocketed up. With Yuzvendra Chahal bowling really tight, the pressure on KKR seemed to be sky-high.

But with someone like Andre Russell in your line-up, the opposition is always under pressure. 56 runs came off the last 19 balls of the innings. Mohammed Siraj bowled two beamers in this game and was pulled out in the 18th over. Marcus Stoinis had to complete the remaining four balls and that is where the carnage began. KKR won the match comfortably by 5 wickets. 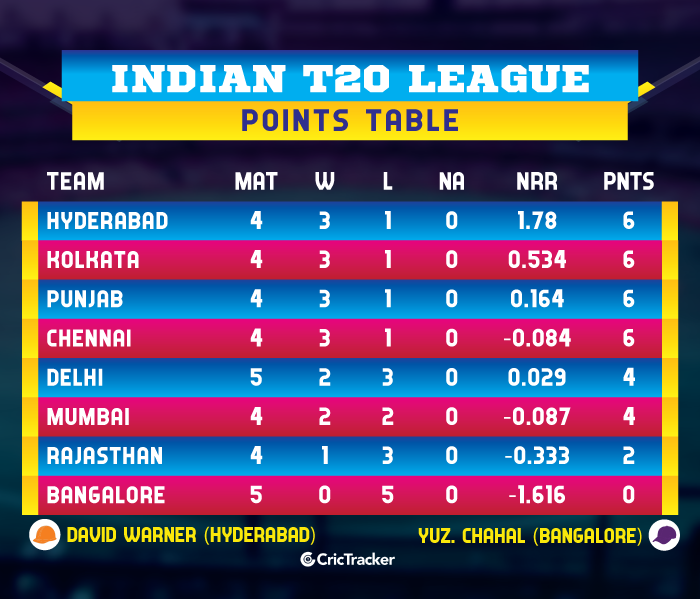