Virat Kohli had a tough start to the IPL 2019 as his team Royal Challengers Bangalore failed to win even one of their first four matches. Individually too, Kohli didn’t have great success as he scored only 78 runs at a strike-rate under 100. However, in a crucial game against the Kolkata Knight Riders, the RCB skipper showed intent straight away. He struck the pacer Prasidh Krishna for back to back boundaries on the first two balls he faced in the game.

He then hit Lockie Ferguson for three boundaries in the 4th over. First of the three boundaries during that over helped Kohli for completing 8000 runs in the Twenty20 format. He thus became only the 7th player and the 2nd from India to aggregate 8000 T20 runs. Chris Gayle, the leading run-getter of the Twenty20 format, was the first of the seven players to reach the milestone. Gayle completed the milestone during the 2015 T20 Blast game in his 213th innings.

Gayle is easily the fastest to this feat as Kohli stands at 2nd as he needed 243 innings; 30 more than Gayle. Virat Kohli also completed 6000 runs in the Twenty20 format on Indian soil when he got to his personal score of 35 in this game. He is the 2nd player to aggregate 6000 runs in the T20 format in a single country. Suresh Raina was the first which he accomplished during the game against the Rajasthan Royals on Sunday.

Earlier in this season, Kohli became the 2nd player to complete 5000 runs in the IPL after Raina who got to the milestone in the opening game of the tournament. Kohli had a chance to become the first Indian to 8000 T20 runs and the first player to both 5000 IPL runs and 6000 T20 runs in a country. However, missing the T20I series in New Zealand and a poor start in the ongoing IPL made him to settle down as the “second” in all the three achievements. 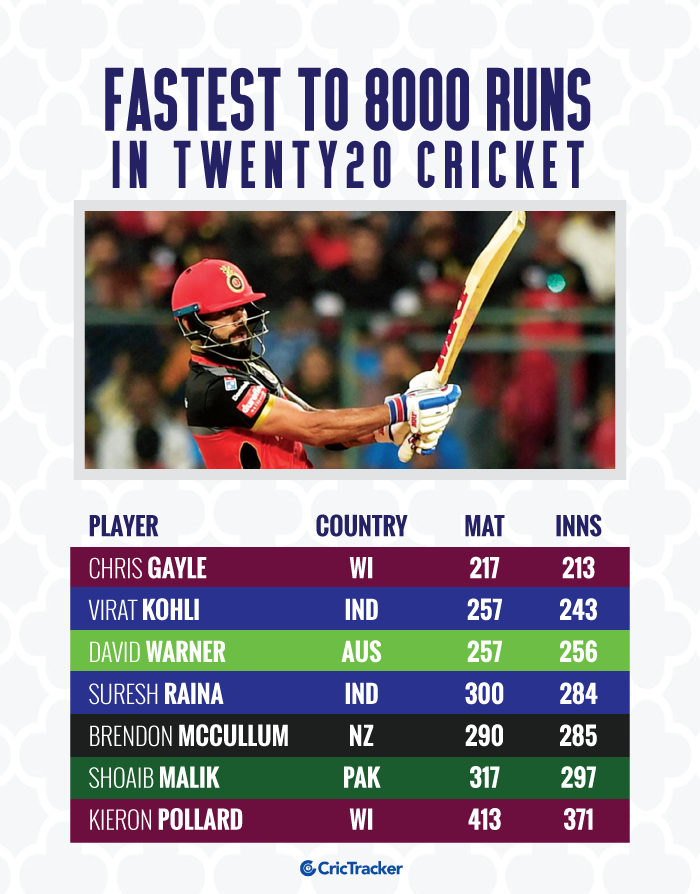