Dwayne Bravo is likely to miss the game due to a hamstring injury.

Chennai Super Kings (CSK) and the Kings XI Punjab (KXIP) are two of the most in-form teams in this edition’s Indian Premier League (IPL). Both have won three matches out of four and are in the top half of the points table. However, their fates in the previous matches were a tad different. The Punjab-based franchise came out trumps against the Delhi Capitals (DC) from a position of trouble.

On the contrary, the MS Dhoni-captained Super Kings lost to the Mumbai Indians (MI) and the defeat ended their three-match winning streak. The two teams are now scheduled to lock horns at the MA Chidambaram Stadium in Chennai in the first of tomorrow’s doubleheader. Punjab can’t be taken lightly as they won two of their five matches against the might of CSK at the very venue.

The 18th game of the IPL between CSK and KXIP will be hosted by MA Chidambaram Stadium in Chennai.

The atmosphere won’t be a pleasant one for the players by any means with the temperature hovering in the high 30s. It will also be humid with the percentages around 75. Players need to stay hydrated during the course of the game.

Dwayne Bravo developed a hamstring injury in the last match and may not play. 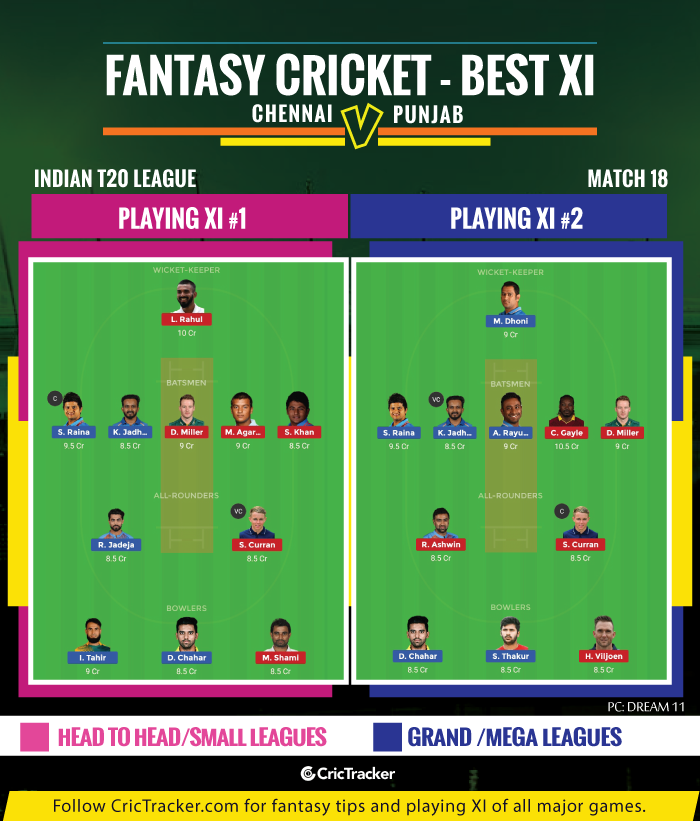 The pitch is expected to provide enough spin and hence, picking more spinners than pacers is advisable for the next game and also because dew isn’t expected to play a part.

If Chris Gayle comes in then Mandeep Singh is likely to face the axe.

The Super Kings are most likely to win the match