Both teams are expected to make changes to their playing eleven after losses in their erstwhile encounters.

The Royal Challengers Bangalore (RCB) have had a forgettable campaign thus far in this edition’s Indian Premier League (IPL). The Virat Kohli-captained team lost their fifth straight game against the Kolkata Knight Riders (KKR) by five wickets to remain winless in the tournament. Needless to say that another defeat would almost pull the curtains down on their chances of progressing to the next round.

The Red Army is next scheduled to play the Delhi Capitals (DC) in Bangalore in the first of tomorrow’s doubleheader. The Capitals, on the contrary, have looked promising, but have stuttered at various stages of the matches. Despite playing well, they lost three matches and are at the bottom of the points table. Shreyas Iyer and Co would want to cash in on the low confidence of the Challengers’ team.

The 20th game of the IPL between RCB and DC will be hosted by M Chinnaswamy Stadium in Bangalore.

According to AccuWeather, the temperature is expected to start at 35 degrees, but the atmosphere will cool down with the progression of the game. The humidity percentages will be on the lower side with the same hovering between the 16-mark.

(Will be updated if there’s any) 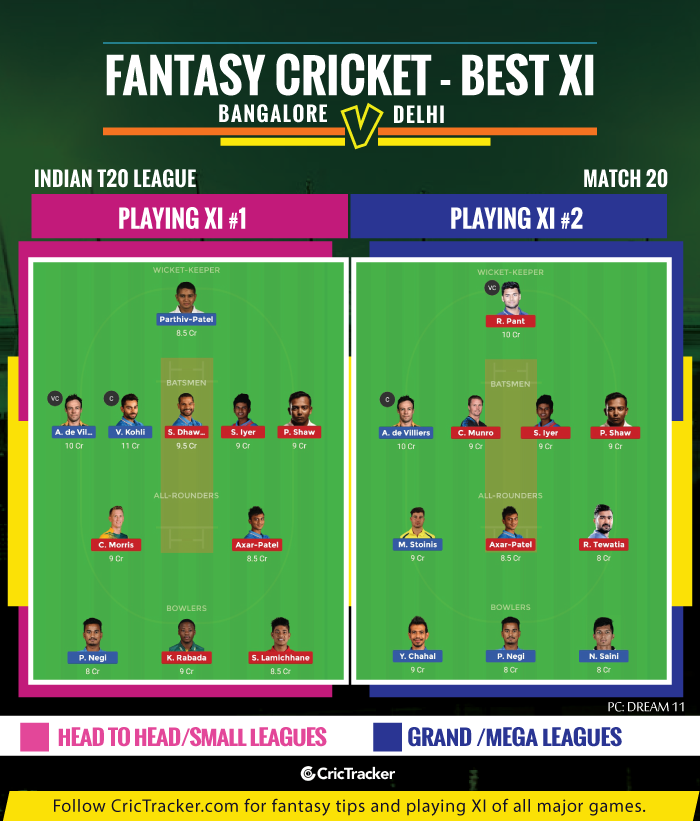 Given RCB’s poor bowling form, it’s advisable to pick a lot of Delhi batsmEn, more so as the pitch at the Chinnaswamy is an absolute belter.

The prediction is for the Challengers to win the match.