The Knights have done well in Jaipur in the last few games.

The Kolkata Knight Riders (KKR) are on a rampage, having won three out of their first four matches in this edition’s Indian Premier League (IPL). In every other match, Dinesh Karthik and Co found themselves in grave trouble, after which Andre Russell bailed them out of jail. Their last victory came against the Royal Challengers Bangalore (RCB) after the visitors needed over 50 runs in the last three overs.

They are next scheduled to lock horns with the Rajasthan Royals (RR) at the Sawai Mansingh Stadium in Jaipur, a venue where KKR have tasted a significant amount of success, winning two of five games. On the other end, the Royals lost three matches to start their campaign following which the franchise brushed aside the RCB at home. In Jaipur itself, RR will be looking to get the better of KKR as well.

According to AccuWeather, the weather conditions aren’t expected to be daunting for the players. The temperature will hover around the 34-degree mark throughout the match. The humidity percentages won’t be high. The pitch is speculated to be good for batting.

The Royals may bring back Sanju Samson, who missed the last match due to injury, for Stuart Binny. Steve Smith and Rahul Tripathi are men in the middle order. Ben Stokes and Krishnappa Gowtham are the all-rounders. RR may also give leg-spinner Sudhesan Midhun an opportunity in place of fast bowler Varun Aaron. He’ll partner Gopal in the spin department. Archer and Kulkarni are the fast bowlers.

The Knight Riders may give left-armer Harry Gurney a chance in place of Lockie Ferguson, who hasn’t picked up many wickets. Gurney will partner Krishna and Russell in the pace bowling department. Lynn and Narine will open the batting with Robin Uthappa at three. Rana and Dinesh are the men in the middle-order. The focus will again be on Andre Russell. Kuldeep, Narine and Chawla are the spinners.

The prediction is for RR to win the match. 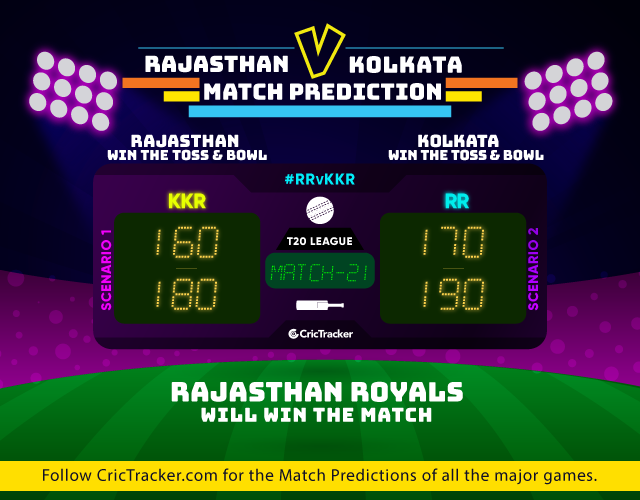