Buttler will be the key player for the Royals.

Well, as the Kolkata Knight Riders (KKR) travel all the way to Jaipur, there is only one question in the minds of fans. Will the Rajasthan Royals (RR) be able to stop the force called Andre Russell? He has snatched victories from hopeless positions for his team and clearly, KKR have been lucky to have him. They haven’t played to the potential at all and still find themselves in the top four with three wins and the only loss coming in the super over.

The Royals will be literally planning to bowl only against Russell ahead of the game. They got the two important points on the board in their previous encounter against the Royal Challengers Bangalore (RCB) and will be confident of continuing the winning momentum. One thing which goes their way is the long boundaries at the Sawai Mansingh stadium. Russell has so far played on small grounds where mis-hits also went for maximum and it will also be test of his skills.

Though KKR will need a massive improvement in their bowling. They can’t keep banking on the Jamaican every now and then and concede above-par scores. Kuldeep Yadav and Piyush Chawla have done well in choking the run-flow but they are not picking wickets. Lockie Ferguson hasn’t been in his groove at all so far. He might get benched in this game for Harry Gurney who has better variations up his sleeve.

The Royals are expected to bring back Sanju Samson at number three who missed the last game. Even Varun Aaron is likely to benched after conceding 16 in the only over he bowled. Sudhesan Midhun, the leggie, looks the best option to replace him. The rest of the team will be the same for the home side.

Chris Lynn came back to form in the previous outing but still looked scratchy. Sunil Narine is also not having a fruitful season with both bat and ball. There could be a case for Russell’s promotion to finish the game early while Dinesh Karthik can handle the things if he gets out early. Ferguson is likely to get replaced by Gurney. 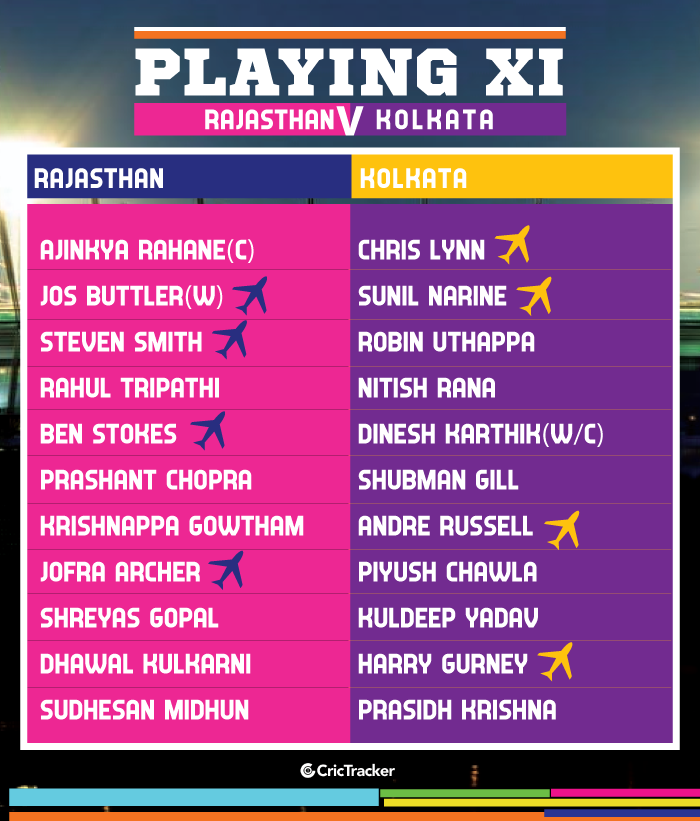 Ajinkya Rahane needs to get going from the word go or look to play the anchor role throughout the innings. At the moment, he is taking a bit of time at the start and gets out soon after the powerplay which is putting the pressure on the middle-order. His approach will be interesting to see if the Royals bat first as they will need at least 20 more runs against Russell.

Chris Lynn has struggled throughout the season. But the way he looked to spend some time in the middle must have relieved the KKR management. Having said that, he is still not giving the team quickfire starts even as Narine is failing. If they are batting first, the middle-order will need a platform to go berserk in the death overs.

17 – Number of wickets for Piyush Chawla in the IPL against the Rajasthan Royals which are the 2nd most for any player.