This match was nothing short of controversy.

The 12th edition of the Indian Premier League (IPL) served up with another thriller. The game between CSK and RR went down right till the last over and also had a tinge of controversy to it. A lot happened in the final over of the match and it is the Chennai Super Kings who emerged the winners ultimately.

Ben Stokes gave away 21 runs off the final over of the match and this over also witnessed MS Dhoni walking onto the field even after he got out. The straight umpire declared a no-ball while the leg umpire did not. There was a lot of confusion in the middle and this infuriated MS Dhoni. He came out to clarify with the umpires and the no-ball was then not declared. Mitchell Santner finished the game for the ‘Men in Yellow’ with a fabulous six.

Chennai Super Kings won the toss and put the opposition into bat first. The Rajasthan Royals got off to a great start in the match with Jos Buttler taking the attack to the bowlers. His partner, Ajinkya Rahane has failed yet again. Deepak Chahar struck him on the pads and it took some convincing from the bowler before MS Dhoni decided to take the review. The replays showed it was plumb in front and Rahane was dismissed for 14 runs.

Jos Buttler, after smashing three consecutive fours off the bowling of Shardul Thakur, tried to smash the fourth ball as well. But he miscued it and gave a straight forward to Ambati Rayudu. Sanju Samson, in his comeback game, was dismissed for 6 runs. Steve Smith and Rahul Tripathi also failed in this game leaving the team in shambles. At the end of 15 overs, RR was reduced to 103/6 and it seemed tough for them to get to a respectable total.

Ben Stokes played a handy knock of 28 runs towards the end. However, Shardul Thakur gave away 18 runs in the final over that helped Rajasthan get to 151 after 20 overs. Shreyas Gopal scored a quickfire 7-ball 19 runs while Ravindra Jadeja picked up two wickets and reached 100 IPL wickets milestone as well.

The last ball thriller ends in the favour of CSK

CSK got to a terrible start in the chase. Shane Watson was dismissed for a duck. Suresh Raina ran poorly between the wickets and was run out by Jofra Archer. Faf du Plessis and Kedar Jadhav were also dismissed cheaply. The visitors were reduced to 24/4 and were in deep territories of trouble. However, Ambati Rayudu and MS Dhoni built up a good partnership.

They added 95 runs together to assist the team get closer to the target. Rayudu, after a long while, registered a half-century. He accrued 57 runs from 47 balls before Ben Stokes dismissed. The 33-year-old hit three sixes and two fours in his innings. MS Dhoni was there in the middle right till the final over and tried hard to take his team over the line. But a beautiful yorker from Ben Stokes dismissed him for 58 runs when the team still required 8 runs from three balls. A series of factors, combined with a last ball six from Santner helped CSK finish the game.

Man of the Match: MS Dhoni 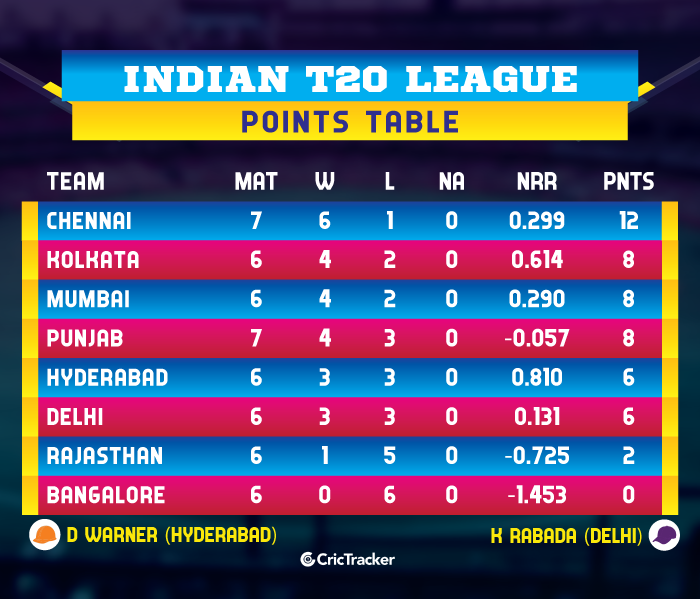