Dhawan was pleased with the team's win and didn't bother about his century.

Shikhar Dhawan played a brilliant knock against the Kolkata Knight Riders (KKR). He was unbeaten on 97 while chasing a steep target and played a selfless knock. The team came first for the left-hander and he was all smiles after his batting partner Colin Ingram hit the winning runs.

KKR is the team that picked the least number of wickets this tournament and their bowling frailties were exposed yet again. Despite having a good total on the board, they failed to defend it and the Capitals completed the match with 7 balls to spare. Shubman Gill scored his second IPL fifty in this game while Andre Russell was at his brutal best.

The visitors got the toss right and they chose to bowl first. KKR was without the regular openers Sunil Narine and Chris Lynn in this match. Thus, Joe Denly was roped in and he opened the innings with Shubman Gill. However, the English cricketer had a disastrous start to the IPL. He registered a first ball duck as Ishant Sharma bowled a beautiful ball.

After this early blow, Gill and Robin Uthappa added 63 runs together. The latter crawled his way to 28 runs from 30 balls before Kagiso Rabada dismissed him. Nitish Rana also failed in this match and got out after getting 12. Surprisingly, Andre Russell walked ahead of Dinesh Karthik in this game and came up with the fireworks as usual. He raced his way to a 21-ball 45 and helped bolster the run rate.

Shubman Gill looked all set for a hundred. However, he ended up playing a poor shot and got out on 65. The youngster hit 7 classy fours and 2 sixes in his innings. An unbeaten 6-ball 14 from Piyush Chawla towards the end assisted KKR to get to 178/7 in 20 overs.

Shikhar Dhawan narrowly misses out on his first T20 century

Prithvi Shaw took the Delhi Capitals to a flyer by scoring 14 runs from 7 balls. However, as he did in the previous few games, he continued to go hard after the bowlers and faltered. Dinesh Karthik plucked a beautifully catch to dismiss the 20-year-old. Shreyas Iyer also soon got out for 6 runs.

After this duo fell, Shikhar Dhawan and Rishabh Pant notched up a match-winning partnership. After piling up 105 runs together, the latter fell yet again when his team was inches short of a win. The wicket-keeper batsman scored 46 runs and got out while trying to play an over-ambitious shot. Shikhar Dhawan was left stranded on 97 as Colin Ingram finished the game for the Capitals with a six.

Man of the Match: Shikhar Dhawan 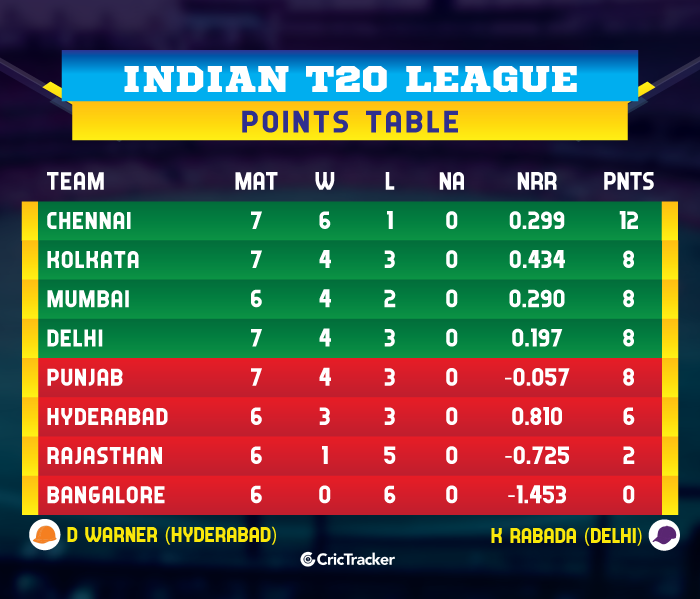