Raina and Tahir had a critical part to play in this match.

The CSK juggernaut keeps on rolling as they managed to upset the Kolkata Knight Riders (KKR) for the second time in the season. While Suresh Raina played a valuable knock, it was Ravindra Jadeja who took the onus and played a gem of an innings. He came in at a critical juncture and finished the game for his team with some big hitting towards the end.

The KKR bowling yet again seemed to be gasless in this match. Moreover, their batsmen also failed to deliver as Andre Russell couldn’t go big in this game. Even though Chris Lynn alone scored over 50 per cent of the runs, they couldn’t put up a big total. This handed KKR over with a 5-wicket loss.

Chris Lynn does all the hard work for KKR

On a flat deck, MS Dhoni won the toss and opted to bowl first. Sunil Narine, Chris Lynn and Harry Gurney were back in the eleven for the home team. However, the Windies cricketer failed to make an impact with the bat and could only score 2 runs.

Then, there was a brief partnership between Lynn and Nitish Rana before the latter got out for 21 runs. Robin Uthappa played a poor shot and tried to smash Imran Tahir out off the first ball that he faced. Faf du Plessis pulled off a blinder to dismiss the batsman for a golden duck.

It was a struggle for the KKR middle-order after these quick wickets fell. Lynn got out for 82 while Dinesh Karthik and Shubman Gill scored 18 and 15 runs respectively. Andre Russell suffered his first failure of the season and got just 10 runs as KKR finished with a below-par score of 161/8.

Suresh Raina and Ravindra Jadeja finish it handsomely for CSK

CSK opener Shane Watson suffered yet another failure in this game. The right-hander got out after scoring just 6 runs. Harry Gurney trapped him LBW in front of the stumps. CSK’s top-order faltered yet again in this game with both Faf du Plessis and Ambati Rayudu unable to get big scores. The South African captain looked good initially but couldn’t kick on and got out for 24 runs.

Rayudu’s stay in the middle was a struggle. He scored 5 runs off 11 balls before he hit a nice, juicy full-toss from Piyush Chawla straight to the cover fielder. MS Dhoni showed great intent as soon as he walked into bat. The skipper smashed a six early in his innings and seemed to be set to finish it for his team. However, a lower back problem surfaced and he struggled since then. Narine got him out LBW after he scored 16 runs.

Suresh Raina and Ravindra Jadeja, though, stayed calm-headed and picked their bowlers well. 41 runs were needed off the last four overs. Prasidh Krishna did a decent job by conceding just 9 runs in the 17th over. Narine followed it up with an 8-run over.

However, Harry Gurney gave away 16 runs off the penultimate over and the game was done by then. Just 8 runs were required from the last over and Ravindra Jadeja hit a four off the first ball. He remained unbeaten on 31 while Raina scored 58.

Man of the Match: Imran Tahir 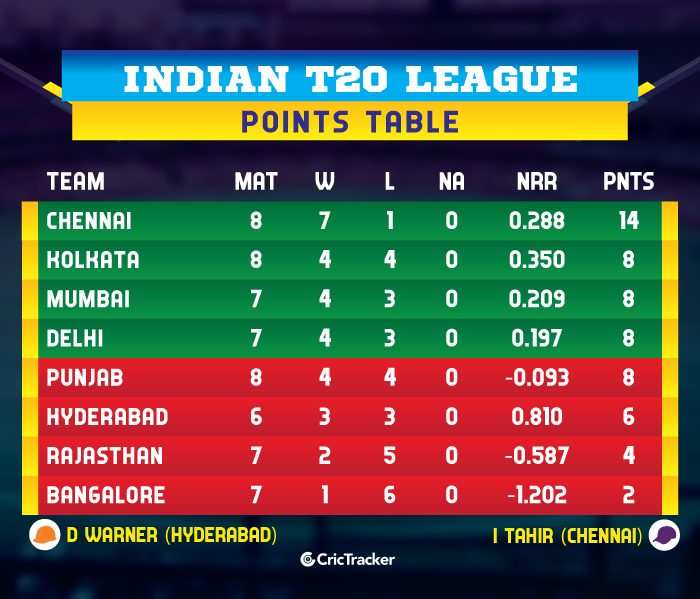