Both the teams are high on confidence after winning their respective games before this one.

The Rajasthan Royals (RR) took a tough decision in the last game by removing Ajinkya Rahane from the helm and the new captain Steve Smith came out with flying colours. He played a match-winning knock for the team in the chase against the Mumbai Indians (MI) and the confidence in the RR camp will be oozing at the moment. Their opponent in this game, Delhi Capitals (DC), are also coming off of a win over the Kings XI Punjab (KXIP) and it should be a good contest.

While DC are sitting pretty with six wins to their name after ten matches, the Royals cannot afford to relax after a victory the other day. They are in a must-win situation and are left with five more matches including this encounter. Smith will have to make sure that his troops don’t relax and stay upbeat on the field. Their fielding is a huge concern and improvement is expected in that aspect.

Shreyas Iyer is leading the team beautifully. Currently, they are looking perfectly settled with one or two of the top four scoring the bulk of the runs while the bowling attack is also doing its job superbly. Kagiso Rabada has led admirably in that department and no wonder he is the leading wicket-taker of the season.

The pitch at the Sawai Mansingh stadium behaved as expected on Saturday and nothing much should change. Dew might play a little bit of a role which will make batting easy later. Expect the team winning the toss to field first which has been a trend this season. The scores will hover around 150-160 and anything above that should be par.

Of course, there are no chances of rain in Jaipur with the sun beating down. The temperature will hover in the mid-30s for the whole day and during the match, it will just come a bit down to 30-31 degrees Celsius. Humidity will be less and it is expected to be a little bit dewy as the evening progresses.

The Royals actually have no reason to change their line-up. But they will be pondering over the inclusion of Liam Livingstone at the expense of Ashton Turner who is yet to open his account in the IPL after playing two matches. Livingstone was dropped only after a solitary failure and deserves more chances. With Ajinkya Rahane removed from captaincy, he will have to score runs consistently, else Rahul Tripathi might replace him at the top of the order.

DC are unlikely to tinker with their winning combination. With Sandeep Lamichhane coming in, their bowling attack looked sharper and he should continue in the XI after the three-wicket haul against KXIP. However, Sherfane Rutherford is coming lower down the order to bat and Chris Morris could replace him. Morris offers four good overs and can tonk the ball as well.

The prediction is for the chasing team to have an upper hand. 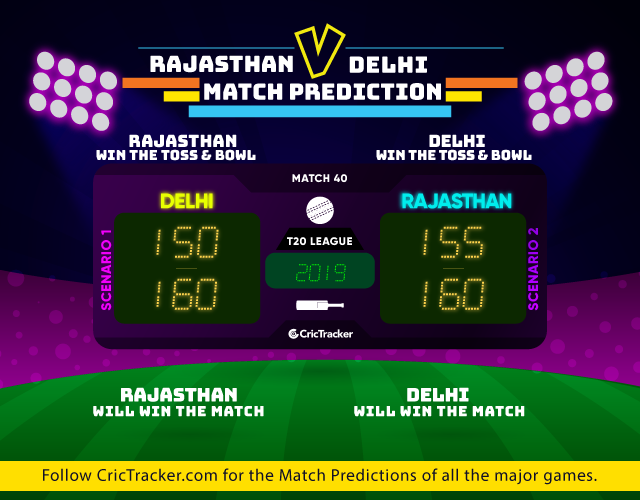