Who would you leave out among Gayle, Rahul, Virat and ABD from your fantasy team?

With their back pushed to the walls, Royal Challengers Bangalore (RCB) managed to string together a couple of handsome victories, the latest was against the then table-toppers Chennai Super Kings (CSK). MS Dhoni almost snatched the match from their grasp at the M Chinnaswamy Stadium in Bangalore, but eventually, Virat Kohli & Co. won the game by one run to remain alive in the tournament.

Their next game is against Kings XI Punjab (KXIP) again at home and RCB can draw heart from the fact that they defeated Ravi Ashwin’s men in their last meeting. In the meantime, Punjab need to be on their toes as well as another defeat couldn’t land their campaign in the doldrums. They last lost against the Delhi Capitals (DC) at the Feroz Shah Kotla and are placed in the fifth position on the points table.

The 42nd game of the IPL between RCB and KXIP will be hosted by the M Chinnaswamy Stadium in Bangalore.

According to AccuWeather, there are no chances of rain as of now. The temperature will start at 30-degree Celsius at 8 pm and will come down to around 25-degrees Celsius by the close of the game. The humidity won’t be a factor either.

The pitch at this venue has been a good one for batting and runs have come at a fair clip. But the bowlers have also reaped benefits. The track isn’t expected to change much and another high-scoring game is well and truly on the cards.

(Will be updated when there is one) 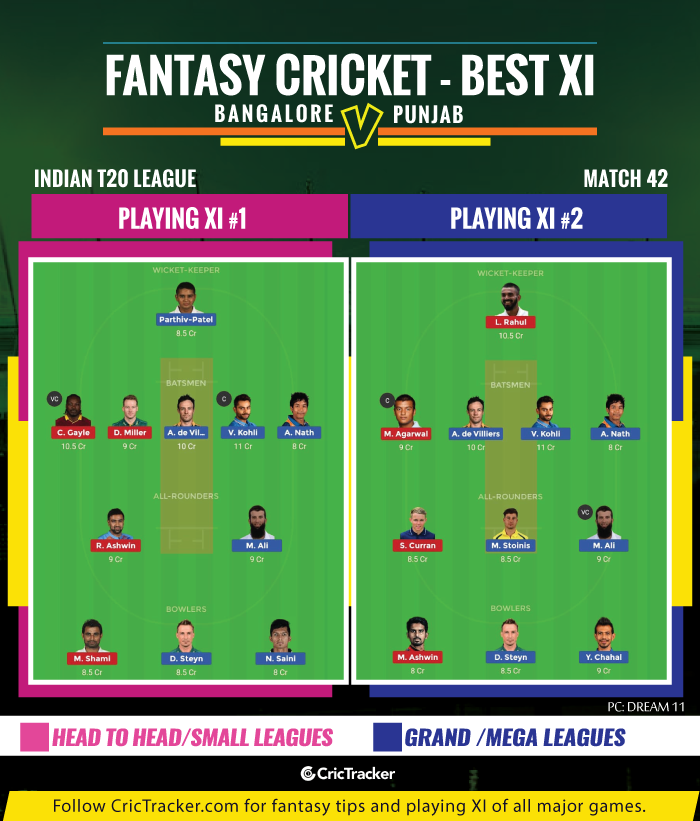 Picking all of Rahul, Gayle, De Villiers and Kohli is literally impossible as they take up 42 credits making it tough to pick the other 7 players inside 58. Considering form and other aspects one can go for Rahul, Gayle and AB.

The Royal Challengers should be able to get over the line.