Ishant and Rabada were brilliant in the death overs.

Match 46 of the Indian Premier League (IPL) witnessed two extreme results for both the teams. While the Delhi Capitals (DC) have made an entry into the playoffs, RCB’s fightback finally came to an end. Their bowling was yet again disappointing in this encounter. Also, the batsmen couldn’t really get going at any stage of the chase. For DC, Sherfane Rutherford was brilliant with his all-round skills in this encounter.

Moreover, Shikhar Dhawan and Shreyas Iyer scored fifties in this encounter as it brought immense joy to the DC camp. Kagiso Rabada, as usual, was great with the ball and did an excellent job at the death. Since they’ve won this game by 16 runs, the Capitals have now got back to the top spot on the points table.

The Delhi Capitals (DC) surprisingly elected to bat first after winning the toss. RCB opened the bowling with spinners at both the ends and the plan backfired. Prithvi Shaw, once again, got to a start but failed to make it big as he was dismissed for 18 runs. Shikhar Dhawan and Shreyas Iyer, though, built up a wonderful partnership and played aggressive cricket. The duo was involved in a 68-run partnership. Dhawan, like he’s been doing in the last few games, tried to score runs quickly.

But he got out as soon as he got to 50. Similar was the case with Shreyas Iyer who tried to accelerate and failed in the attempt. The skipper walked back to the pavilion after scoring 52 and the middle order troubles for DC were evident once again. From 103/2, they were brought down to 141/5. While it seemed as if they wouldn’t get to a big total, Sherfane Rutherford and Axar Patel came to the rescue. The RCB bowlers conceded 36 runs in the last two overs as DC finished with a score of 187/5 in 20 overs. The Caribbean remained unbeaten on 28 runs from 13 balls.

RCB batsmen struggle in the chase

Parthiv Patel took RCB off to a flyer in the powerplay and Virat Kohli was a mere spectator at the other end in the first three overs. He scored 39 runs from 20 balls and got out on the penultimate delivery of the powerplay. However, enough damage was done by then as RCB yielded 64 runs from the first six. While Virat and AB de Villiers were expected to play big knocks in this must-win encounter, both of them failed.

The skipper got out soon after Parthiv was dismissed. While he scored 23 runs, ABD perished after getting 17 from 19 balls. The going got really tough for RCB once these two were back in the hut. They lost some quick wickets and were brought down to 111/5 from 103/2. 52 runs were needed in the last four overs for RCB to win the match. But Ishant Sharma and Kagiso Rabada did an excellent job and defended the target. 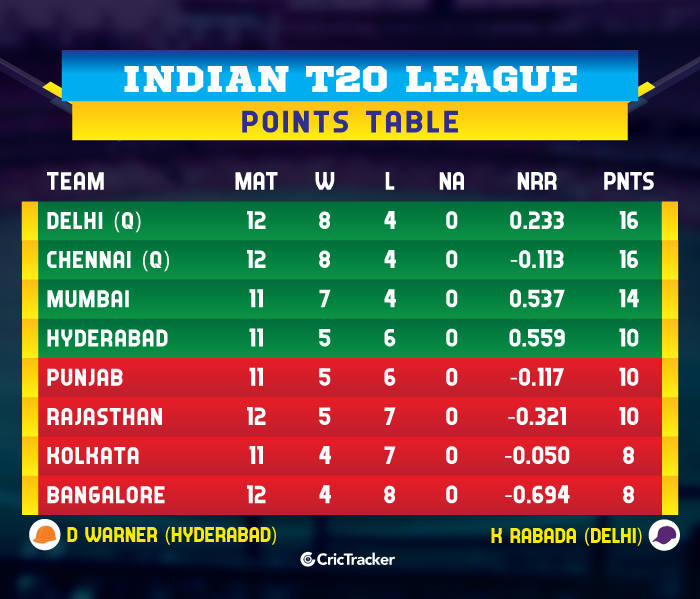