IPL 2019: Match 5, DC vs CSK, Review – Clinical visitors climb up to the top of points table with back-to-back wins

IPL 2019: Match 5, DC vs CSK, Review – Clinical visitors climb up to the top of points table with back-to-back wins

Chennai Super Kings avenged their loss at Kotla from 2018.

The Chennai Super Kings (CSK) registered back-to-back wins in their first two games of IPL 2019. Playing away from home, they comfortably registered a win against the Delhi Capitals (DC) at the Feroz Shah Kotla. It was quite a clinical performance by the visitors, first with the ball and then with the bat.

After the thunderous win against the Mumbai Indians, the Capitals were expected to put up a much tougher fight. But the two-paced pitch never suited their style of play and the bowlers were left with very little to defend. Even though the game went deep, CSK were always in control. They took their time in the chase and didn’t break a sweat as they got over the line with 6 wickets to spare.

Shreyas Iyer won the toss at the Feroz Shah Kotla and opted to bat first. However, the Delhi Capitals never got going in their innings. With five fours early on, Prithvi Shaw looked quite positive. But Deepak Chahar got him in the fifth over of the innings. Shaw tried to charge down the wicket but miscued the ball straight to Shane Watson at mid-wicket. Iyer never found the right momentum in this match and had a struggled stay in the middle.

Imran Tahir trapped him LBW in front of the stumps after he crawled to 18 off 20 balls. Rishabh Pant tried to go after the bowlers just like he did in the last game. However, it was not his day and was dismissed by DJ Bravo for 25 runs. He tried to pull a ball over deep square leg but found the fielder. Wickets kept falling one after the other as soon as Pant got out.

Colin Ingram could only score two runs while Keemo Paul was dismissed for a duck. After battling hard, Dhawan got out for 51 which came off 47 balls and Bravo broke the back of Delhi by picking three wickets in a span of six balls. Rahul Tewatia played a little cameo towards the end as the hosts finished with a score of 147 runs in 20 overs.

In the chase, the home team had an early breakthrough as Ambati Rayudu was dismissed for just 5 runs. But, Shane Watson and Suresh Raina took the attack to the bowlers and brought the required run-rate well under control. The Australian smashed three sixes and four boundaries in his innings and got out after scoring 44 off 26 balls. Rishabh Pant effected a smart stumping to dismiss the batsman. Raina also got out soon as he edged one of the bowling of Amit Mishra which the keeper collected comfortably.

Kedar Jadhav and MS Dhoni took a lot of while to get going. They consumed too many balls and the pressure seemed to be mounting on CSK. But, MSD was in such situations on several occasions before and was undeterred by the pressure. In the 19th over of the match, Dhoni smashed a massive six and got his team extremely close to a win. Jadhav got out of the first ball of 20th over with his team two runs shy of a win. DJ Bravo hit a four at the end to finish things off in style for his team.

Man of the Match: Shane Watson 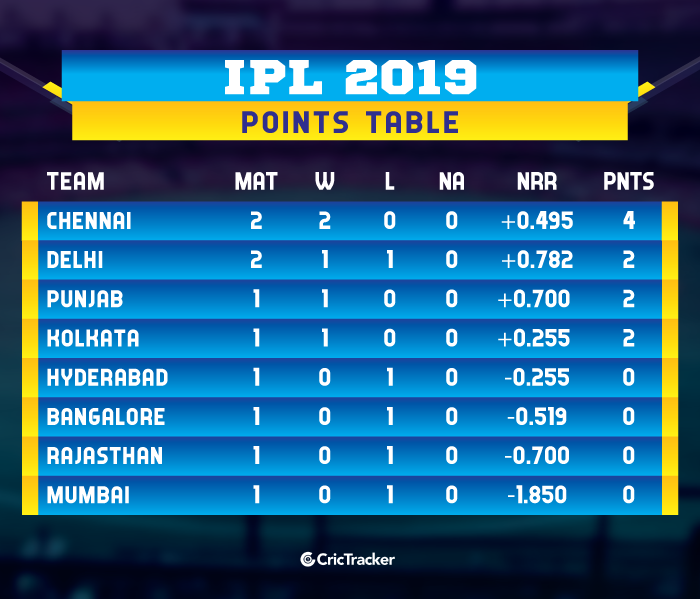