On head to head count at the Wankhede, Mumbai lead SRH by a margin of 3-1.

The Sunrisers Hyderabad (SRH) currently finds themselves in a bit of a tangle going into their last couple of games in the round-robin stage. That because both David Warner and Jonny Bairstow won’t be available. The Kane Williamson-led SRH won their last match against the Kings XI Punjab (KXIP) by 45 runs and are next scheduled to play the Mumbai Indians (MI) at the Wankhede Stadium.

Another defeat can put the Orange Army in grave danger. Mumbai, on the contrary, has been on the top half of the points table for quite some time. However, they lost their erstwhile match against the Kolkata Knight Riders (KKR) at the Eden Gardens by 34 runs. Though the team is placed pretty comfortably, Rohit Sharma’s men won’t want their qualification hopes to rest on the final league encounter.

The pitch at the Wankhede hasn’t given much to the bowlers. Runs have come at a fair clip and bowlers have been under the pump. The next game is Mumbai’s penultimate home game this season and the track isn’t expected to alter that much. All in all, another run-churning spree seems to be in store.

The temperature will be around the 28 degrees Celsius throughout the duration of the match. The humidity will be on the higher side with the numbers between 83 and 87 per cent. There will be a significant amount of dew and hence the toss could play a crucial role in deciding the winner.

Mumbai, even after the loss to KKR, may not change their lineup. Barinder Sran gave away 27 runs in his two overs in the last match, but he may be given a chance to make amends. Lasith Malinga and Jasprit Bumrah also had an off-day against the Knights and MI’s hopes versus SRH will rest on the shoulders of the lethal duo. The top-order, consisting of Rohit, De Kock and Lewis will need to set the platform.

The Sunrisers are likely to bring in Martin Guptill as Warner’s replacement. Williamson played a quick-fire knock of 14 off 7 versus the Kings and that’s good signs for the Orange Army ahead of the crunch games. Khaleel Ahmed and Rashid Khan picked up three wickets the other night and they will have to deliver once again.

The Trinidadian has played two games this season. And on both occasions, he got off to starts, scoring 32 and 15 respectively. But he couldn’t convert them. If Mumbai loses an early wicket, Lewis needs to play a substantial knock being one of the more explosive batsmen in the lineup. The track at the Wankhede isn’t speculated to pose much of a threat and Lewis has every chance of scoring big.

The leg-spinner hasn’t been at his very best but has picked up at least one wicket per-match in his last nine outings. Nevertheless, he gave a glimpse of his stupendous self against KXIP giving away just 21 runs and picked three crucial wickets. The 20-year-old was even on a hat-trick after getting rid of David Miller and Ravi Ashwin. He will be put to test on the Mumbai pitch though. 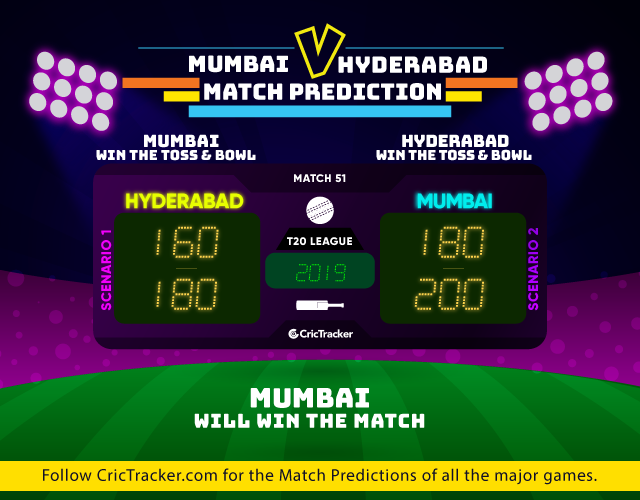