The team that loses this match will be knocked out of the tournament.

The last week of the league stage in the Indian Premier League (IPL) is currently in progress and the time has come for the second team to get knocked out of the tournament. Kings XI Punjab (KXIP) will host Kolkata Knight Riders (KKR) as both the teams find themselves in a must-win situation. They are at the seventh and sixth position respectively in the points table and the playoff hopes are set to vanish for one of the teams.

After losing six matches on the trot, KKR finally managed to cross the line against the Mumbai Indians (MI), their nemesis in the IPL. The only fact that they defeated the Rohit Sharma-led side must have increased the team’s confidence and they will be gunning to take the field on Friday. KKR team management finally promoted Andre Russell up the order and the result was a mammoth total of 232 on the board. The Jamaican should continue to bat at four or rather three regardless of the match situation.

KXIP, on the other hand, are playing at home for the first time since April 16 and have lost three matches on the bounce in this period. Coming back to Mohali must make them feel good and the crowd support will definitely gee them up to put their best foot forward. This is also the knockout game for them and the likes of KL Rahul and Chris Gayle have to contribute big to keep the team in the hunt.

The 22 yards at the Punjab Cricket Association IS Bindra Stadium is expected to be a good one for batting. The curators have got enough time to prepare the pitch and that should help the batsmen. With dew playing its role, the team winning the toss will surely opt to field. The ball also comes nicely on the bat in the second innings.

It will be cloudy the whole day in Mohali on Friday and if that is the case, then dew might not come into play. The temperature will hover in the low 30s during the match. Despite the cloud cover, there is no rain in the forecast as of now.

Changes look inevitable for the home side and Mujeeb Ur Rahman who conceded the second-worst figures in IPL history against SRH is likely to be left out. Sam Curran might come into the playing XI as he also provides an extra batting option to the skipper. Mandeep Singh will also return into the mix in place of Prabhsimran Singh who didn’t have a memorable IPL debut.

KKR finally got their combinations right in the previous game and they are most likely to continue with the same XI. But their bowling attack still looks extremely weak. Hardik Pandya made a mockery of every bowler on his way to 91 off 34 deliveries. They should somehow look to stop Gayle force and Rahul at the top to restrict Punjab. Kuldeep Yadav also might come in having spent some time on the sidelines now. But at who will make way, is a question that persists.

Chris Gayle nowadays takes his time to get going. Though he has played a couple of blitzkrieg kind of knocks this season, the brutal Gayle force is still missing. KKR’s bowlers will be short on confidence and the southpaw might take advantage of the same in Mohali. He loves batting in Mohali and would like to add more runs to his kitty. So far this season, he has mustered 448 runs in 11 matches and is sixth among the top run-getters.

There are no prizes for guessing. Russell has to perform at any cost if KKR are to stay alive in the tournament. He is a match-winner for them and has carried the team on his shoulders this year. The Caribbean himself cleared that he gives 150 percent on the field and the numbers justify it as well. Russell is the MVP of this season clearly with 486 runs to his name and add to it the 10 wickets he has picked in 12 matches.

The prediction is for the team batting second to chase down the total. 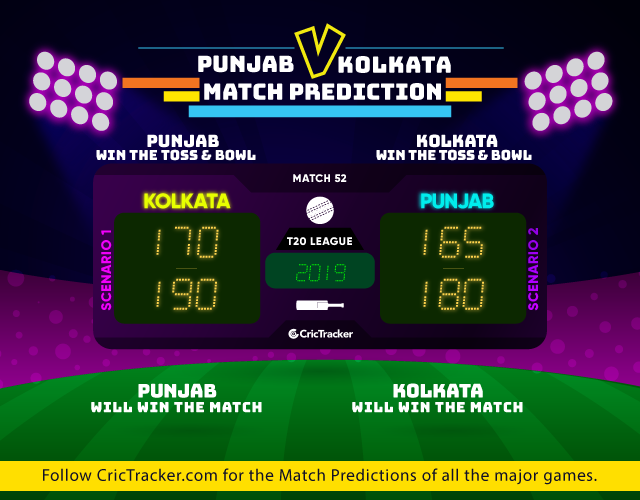