Basil Thampi tops the list of conceding the most number of runs (70) followed by Ishant Sharma and Mujeeb Ur Rahman, who conceded 66 runs.

Teenage Kings XI Punjab (KXIP) spinner Mujeeb Ur Rahman who had a sensational debut in the Indian Premier League (IPL) last year, has failed to live up to the expectations this season. While the 18-year-old had taken 14 wickets in 11 matches at an average of below 21, his figures this year look ominous: three wickets from five matches at an average of 63 plus and an economy rate of 10 plus (last year, it was below seven). The Afghanistan spinner had a forgettable outing on Monday in Hyderabad as the local side – Sunrisers Hyderabad (SRH) made mincemeat of his bowling.

Mujeeb found himself straightaway in the firing line after KXIP captain Ravichandran Ashwin won the toss and asked the SRH to bat first. Openers David Warner (81 off 56 balls) and Wriddhiman Saha (28 off 13 balls) gave Hyderabad a flying start and in the process, destroyed the two young opening bowlers – Arshdeep Singh (1 for 42 in four overs) and Mujeeb (66 in four overs). And Mujeeb’s figures earned him a dubious record of becoming the joint second-most expensive bowler in the history of the IPL.

The off-break bowler, who has a T20 career average of below 25 and an economy rate of less than seven in 64 matches, was nowhere near his best this season. His none for 66 runs conceded in four overs at an average of 16.50 equalled the nearly six-year-old record of Indian speedster Ishant Sharma. Ishant had conceded the same number of runs while playing for the SRH while it was the Chennai Super Kings at the dictating end on that occasion.

However, the record of being the most expensive bowler in an IPL is in the possession of pacer Basil Thampi who gave away 70 runs in just four overs (average 17.50) against the Royal Challengers Bangalore in Bengaluru last year. Thampi had also bowled for the SRH on that occasion and was taken apart by the likes of AB de Villiers and Moeen Ali.

Hence, it was the day for the Sunrisers to settle the scores on Monday.

The other most expensive bowlers in the list are Umesh Yadav, who had given away 65 runs for the former Delhi Daredevils (now Capitals) in May 2013. Sandeep Sharma, who bowled for the KXIP against the SRH in May 2014, also conceded 65 runs in four overs though he got a wicket. 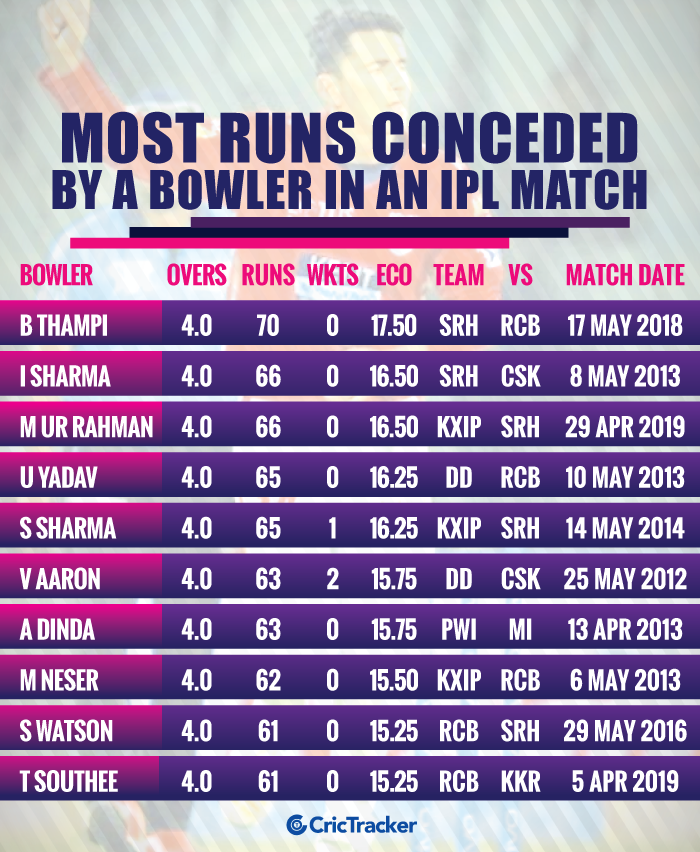