There is a marginal possibility for Kings XI to qualify for Playoffs, they primarily have to defeat the high-flying Chennai Super Kings by a huge margin.

For the second season running, Kings XI Punjab has squandered a fantastic opportunity to enter the playoffs despite getting off to a positive start in the season. They were placed very well in the points table at the end of 20 matches and it seemed like they will be one of the top contenders to win the title. Things haven’t panned that way for them and as it stands, they are staring at another embarrassing exit.

There is a marginal possibility for Kings XI to qualify from here, but for that, they primarily have to defeat the high-flying Chennai Super Kings by a huge margin. They also have to pray for the Sunrisers Hyderabad and Kolkata Knight Riders to lose by a very significant margin, just to ensure they get their net run-rate above these sides in case of a tie.

Well, the Chennai unit has looked formidable as always this season. Despite their little problems, they managed to overhaul the weaknesses some way or the other. They have a new player stepping up every game, which is another major reason behind their success since coming back in 2018. Given their place in the top two is pretty much assured, they will play some free-flowing cricket, which won’t do any good to KXIP’s conquest.

They need an awful lot of runs from the top four which includes some clean strikers in KL Rahul, Chris Gayle, Mayank Agarwal and Nicholas Pooran. Mandeep hasn’t had a lot of chances but has a plethora of experience of playing at this level. Despite firing with the bat, Curran got hammered with the ball, alike many of his companions against KKR. Ankit Rajpoot and Hardus Viljoen are expected to replace Arshdeep Singh and the ineffective big signing Andrew Tye.

Faf du Plessis will be available for the whole season, much to the delight of CSK. Their middle order hasn’t pulled out many good performances barring the stupendous efforts of MS Dhoni. Raina got among the runs in the last game but Rayudu has been scoring at a strike-rate under 100. Imran Tahir will be eyeing for the purple cap with Rabada’s departure whilst Deepak Chahar and Harbhajan Singh will be keen to keep up the good work they did thus far. 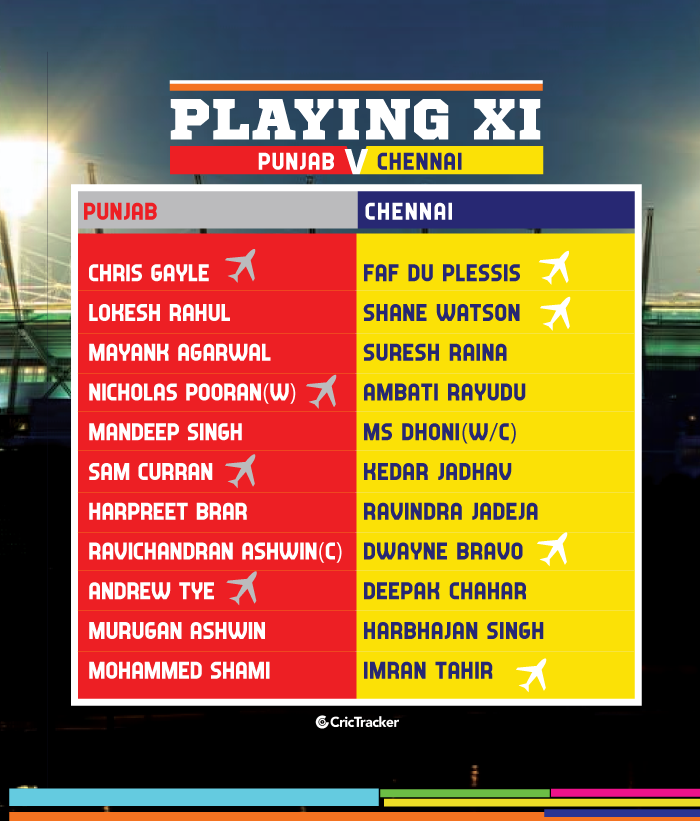 It has to be the Universe Boss for the Kings XI Punjab to come up with something brutal. The big man in the past has done some wreckage when he played against a few teams this season. Punjab needs something similar to keep the Red Flag flying high. The PCA Stadium is not a venue where we see scores of 230-240, which in a way is the need of the hour for the hosts. But with Gayle on the side, anything is possible.

Mohali historically has provided great seam and bounce for the fast bowlers, which should keep Deepak Chahar very much interested. The youngster has enjoyed a terrific season for the 3-time champions, picking wickets at regular intervals at the top. His exploits with the new ball received great compliments from legendary cricketers and he would be keen to finish the group stages on a high.

38 – Chris Gayle needs 38 runs to complete 500 runs in an IPL season. This will be the fourth time for him to achieve the feat and the first time since 2013.