Who will be able to register their first win of the season?

The Sunrisers Hyderabad (SRH) were left stunned with Andre Russell‘s whirlwind knock in their season opener against the Kolkata Knight Riders (KKR). They performed extremely well throughout the game and ticked most of the boxes only to go down in front of the Carribean monster in the last three overs. Nevertheless, they are still one of the strongest sides in the tournament and hope to get past the Rajasthan Royals (RR) in their first home game.

The Royals are coming off a controversial encounter against the Punjab team back home. Ravi Ashwin mankading Jos Buttler derailed their chase and they will be eager to get the focus back on cricket. Though the England cricketer’s form was a huge positive and the middle-order has to step up in crunch situations now. The bowlers did well to restrict the opposition under 200 despite coming in the way of Gayle storm.

Kane Williamson might have recovered from his shoulder injury by now and he should return at the helm in that case. Though Bhuvneshwar Kumar did well in his first game at the helm. The team possesses one of the best bowling attacks and playing at the home ground which has longer boundaries will suit their style of play.

The pitch at the Rajeev Gandhi International stadium is known to be a sporting one. The SRH batsmen thrive on these surfaces and they love playing at the venue. 33 out of 56 IPL matches have been won by the chasing teams at the venue which means the team winning the toss will bowl first. It will be extremely hot in Hyderabad in the lead up to the game. Though the temperatures will come down in the evening much to the relief of the players. No rain is in the forecast.

The SRH side might make a couple of changes to their side if Kane Williamson is fit. With Jonny Bairstow doing well, Shakib Al Hasan is likely to make way for the Kiwi batsman. Also, they will then have to add one bowler and Shahbaz Nadeem seems to be the like-for-like replacement for Shakib. Deepak Hooda will be unlucky to be benched then. The rest of the side is expected to be the same.

The Royals aren’t expected to make any changes to their line-up. This seems to be their best XI and the franchise will be eager to get the best out of the available overseas players before they leave. Having said that, the Indian contingent has to step up for them after which they might start to win more games consistently.

The prediction is for the Sunrisers Hyderabad to register their first win of the season. 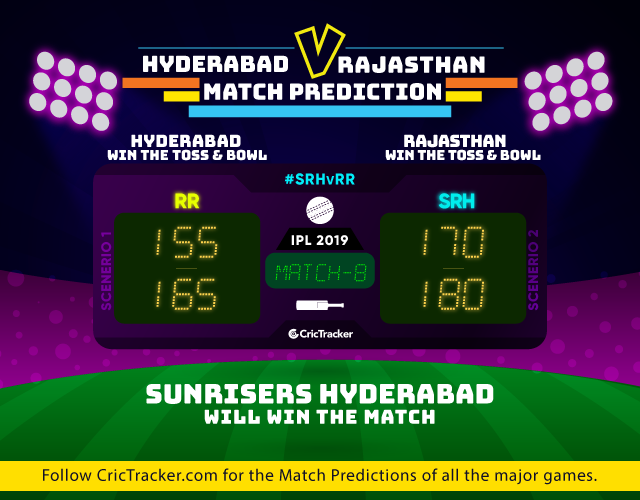