SRH continue to dominate at home.

The eighth game of the Indian Premier League (IPL) in Hyderabad was a run riot. Nearly 400 runs were scored in this match and it witnessed one century and two half-centuries. The Sunrisers Hyderabad (SRH) were always in control of the match on a good batting surface until Rajasthan Royals applied some pressure in the last few overs. David Warner played a very useful knock and was assisted well by Vijay Shankar.

The home team managed to sail through quite comfortably and won the match by 5 wickets and six balls to spare. Sanju Samson scored a terrific ton in this game and registered the first century of the season. However, his efforts went in vain as SRH continued to dominate at home.

Sanju Samson notches up the first ton of IPL 2019

The Royals won the toss and opted to bat first in this crucial encounter. Going by what the experts said, anything around 160 or 170 seemed to have been an ideal first innings score at the venue. But the RR batsmen had other plans. Ajinkya Rahane and Sanju Samson played terrific knocks and got the team off to a massive score.

While many expect Jos Buttler to fire considering his recent form, SRH had him early. It was a masterstroke by Kane Williamson to bowl Rashid Khan in the third over of the match. He cleaned up the danger man quite early but Rajasthan recovered really well. Rahane and Samson added 119 runs together and were a treat to watch.

The skipper was the first to back to the pavilion after a well-compiled 70. He shimmied down the track off the bowling of Shahbaz Nadeem and tried to clear the ropes but holed out to the fielder. Samson went onto notch up a 54-ball century, the first of the season. With Ben Stokes also playing a nice cameo, RR finished with a mammoth score of 198/2. SRH’s death bowling was a concern as they leaked 76 runs in the last five overs. Bhuvneshwar Kumar gave away 45 runs in the two overs that he bowled at the death.

It was always going to be quite a tough chase for the home team. But no one had any doubts after watching David Warner bat. He took the team off to a flyer as SRH scored 69 runs in the powerplay. Warner faced 27 of these 36 balls and scored 52 runs. Jonny Bairstow also chipped in with a couple of fours when the field was up.

Warner got out after SRH scored 110 runs in just 9.4 overs. The left-hander scored 69 off just 37 balls, hit nine fours and two sixes before he was outdone by a short ball from Ben Stokes. Bairstow was dropped in the same over but was eventually dismissed in the next over after he raced his way to a 28-ball 45. Vijay Shankar, who came in next played a very aggressive knock.

He took just 15 balls to score 35 runs and kept the team going strong during the middle overs. However, SRH lost a flurry of wickets in between. Skipper Kane Williamson got out for 14 while Shreyas Gopal cleaned up both Shankar and Manish Pandey in the same over. Rashid Khan hit a four and a six towards the end even though the pressure was building up and finished the match for SRH.

Man of the Match: Rashid Khan 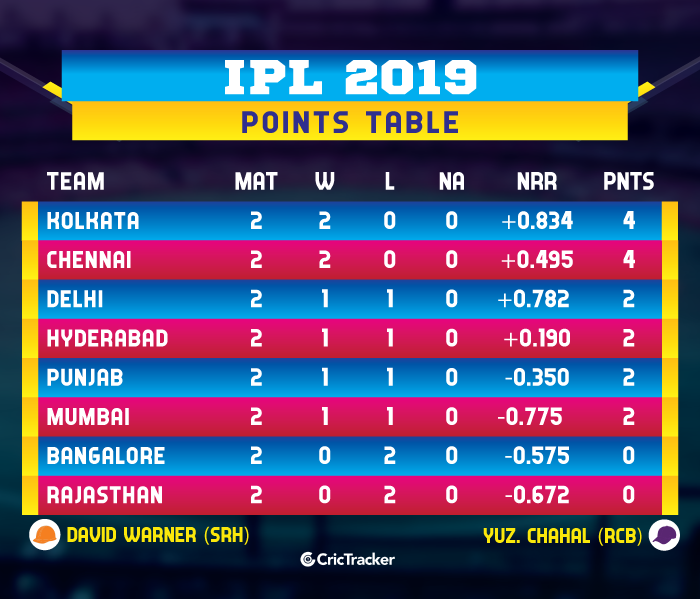