DC have come second on both the occasions against CSK this season.

The 12th edition of the Indian Premier League (IPL) has found its top three teams. No matter what happens from here on, all the three sides should feel proud of what they have achieved. The Delhi Capitals (DC) overcame the massive threat from Sunrisers Hyderabad on Wednesday and they need to take down one the most consistent teams of the IPL, Chennai Super Kings (CSK) to go into the finals.

CSK, somehow, have failed to go past the Mumbai Indians outfit this season and now have been forced to take the long route to make it to the final. They have thrashed the Capitals in both the encounters this season. Rather a thumping loss at the hands of CSK was the reasons why the Shreyas Iyer-led side slumped to the third position in the points table and had to play the eliminator. MS Dhoni would want his Dad’s Army to put their best foot forward having backed them throughout the season.

Rishabh Pant led the way for Delhi in Vizag with his blitzkrieg. But the youngster had almost risked the game by playing a reckless shot with things in control. The Capitals still have a few loopholes in their line-up and one is the underperforming ‘Colins’. Both, Colin Munro and Colin Ingram, haven’t played at par with the expectations this season and against CSK, whoever plays, will be key as the opposition will surely target them as the weak link.

It was a perfect pitch at Vizag for the eliminator. The score between 160-170 seems to be par on the wicket and it will turn for the whole of 40 overs bringing the spinners into the game. Dew will play its role in the second innings but if the team batting first has enough runs on the board, they can defend it.

The temperature in Visakhapatnam will hover in the 30s during the match. Also, it will remain cloudy during the match with dew also making its presence felt. There is no rain in the forecast.

CSK have backed the same set of players whole season and they are unlikely to make any changes for this crunch game. The time has come for Shane Watson to repay the faith while Faf du Plessis also has been strangely inconsistent. The case is similar with Suresh Raina as well while Murali Vijay in the middle-order looks a serious misfit. Only MS Dhoni has been consistent enough for the team and the bowlers like Imran Tahir and Harbhajan Singh would be key.

Why change the winning combination? Delhi Capitals played their best side in the eliminator and the same lot is expected to take the field for this game as well. There is a worry about Colin Munro’s ability playing spin and they might ponder over bringing in the T20 veteran Ingram who also is not having the best of seasons. Ishant Sharma has stepped up in Kagiso Rabada’s absence and that has worked well for the team big time.

Faf du Plessis ended the league stage with a masterful 96 against the KXIP. He has amassed 320 runs so far in 10 outings and his calm head is key for CSK. With Watson struggling big time, the South African should look to play cautiously. He shifts the gears superbly after crossing the 50-run mark and on a pitch like Vizag, it is important for a set player to stay in the middle.

Shikhar Dhawan has been scoring runs consistently this season. With a place in the finals up for grabs, the southpaw will be dangerous for the opposition. He has often provided the team with extremely good starts and will look to do the same again. If Dhawan plays the big knock, he might well make the game one-sided.

The prediction is for the team batting second to win the match and seal a place in the final. 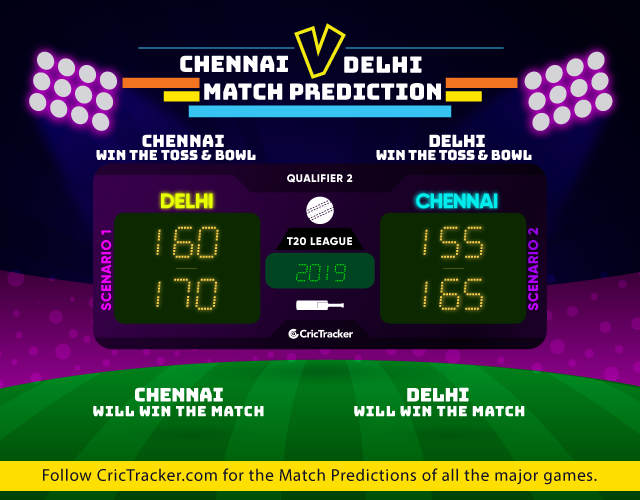