A total of 332 players have been shortlisted for the auction.

There is always a great buzz whenever an IPL auction is around. Nothing different this time either and there is a great deal of excitement about it already. All the eight teams have gone ahead with different strategies for the upcoming edition as far as the releases and retentions were concerned. As many as 71 players were released by their respective franchises last month.

At the same time, 127 cricketers including 35 overseas players were retained by the teams. While some teams left out quite a few cricketers, a few others preferred maintaining the stability. For the auction that will be held on 19 December 2019, a total of 971 players enrolled their names. These included 215 capped players and 754 uncapped players. A couple of other players are from the associate nations – the USA and the Netherlands.

However, just 73 spots are up for grabs and it will be a cut-throat competition here. The franchises submitted their shortlist of players recently and a total of 332 players are set to go under the hammer in the auction.

Here is everything you need to know about the IPL Auction 2020:

You can watch the auction event live on Star Sports and Hotstar. The entire event will be covered on Crictracker where you can catch all the live updates.

The IPL auction will commence at 3.30 PM IST on December 19.

Number of players who can be picked

Number of players who enrolled for the IPL 2020 Auction

A total of 134 capped and 198 uncapped players have been shortlisted for the auction.

The total money that can be spent

Budget left and slots available for each of the eight franchises 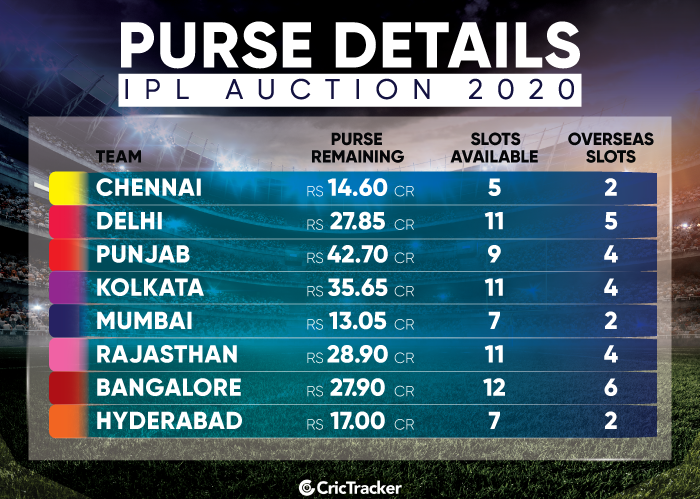