Will the new opening pair of Shikhar Dhawan and Marcus Stoinis work in the finale?

Mumbai Indians will step into the field on Tuesday with eyes on their 5th IPL title against the Delhi Capitals who have made it to the final for the first time. Mumbai have barely lost momentum in the tournament as they never lost successive matches. On the other hand, the Delhi franchise was comfortably placed at the top with seven wins after nine matches. However, a 4-match losing streak put their playoff qualification under threat but the Shreyas Iyer-led team got through to final by seizing crucial moments.

Will Delhi able to handle the Boult-Bumrah pair?

Trent Boult and Jasprit Bumrah have been pretty heavy over the Delhi Capitals as the collectively picked 12 wickets in three meetings against them. The last two games against MI have been the toughest for Delhi batters as Boult bagged five wickets including four of them in the powerplay while Bumrah picked a total of seven wickets. The two pacers bowled as many as ten powerplay overs this season to Delhi Capitals and ended up with seven wickets. It has to be seen if the pairing of Dhawan-Stoinis at the top will bring any change to Delhi’s performance. 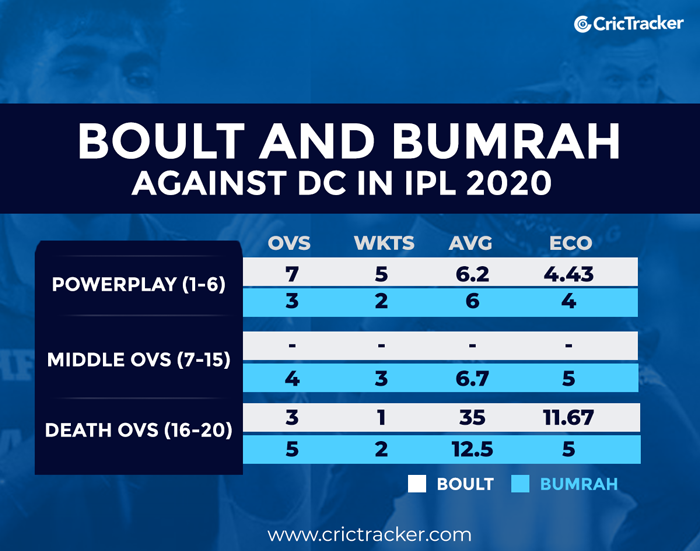 Can MI escape the threat of Ashwin?

Mumbai Indians did not rely much on their skipper Rohit Sharma’s batting performances for the most of the season. However, they might require a good knock from Rohit in the final which can help the batters in helping the team to not hold back. The threat looms for them in the form of Ravichandran Ashwin who has dismissed Quinton de Kock and Kieron Pollard on four occasions each. 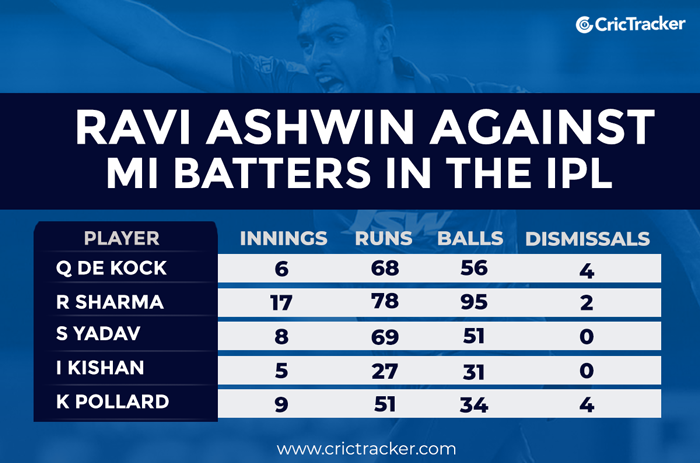 If Rohit can get through the powerplay and see through a couple of overs of Ashwin, the uncapped players Suryakumar Yadav and Ishan Kishan can make most of the solid start. It will be interesting how Rohit will be approaching with the bat as he struggled to get going since his comeback. Rohit scored over 200 runs in the first six games of the season with attacking starts which MI would take happily in the big game.

Will the Delhi’s speedster bounce back against Mumbai?

Kagiso Rabada and Anrich Nortje have been a tricky pair for most of the teams in IPL 2020 but not for the Mumbai Indians. The speedsters could only bag two wickets each in the three matches they played against MI thus far. Three of those four wickets picked by them against MI came in the game played during the first half. Rabada has gone wicketless in both the matches he played against MI in last two weeks. He had taken a heavy beating from the pocked dynamite Ishan Kishan who has been critical in MI’s success this year. 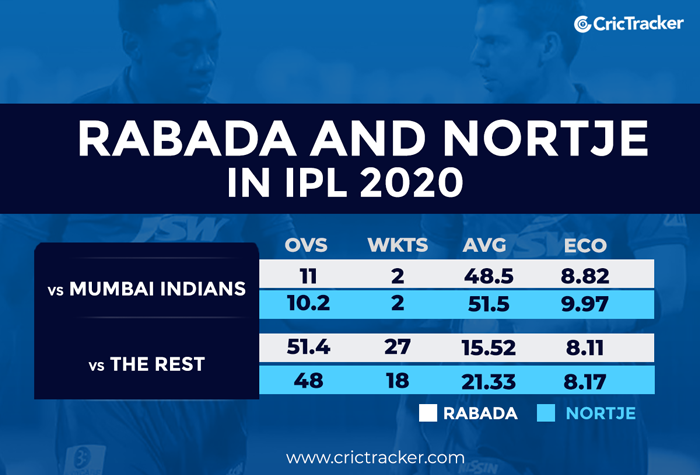