IPL 2020: Is the Sanju Samson tale following a similar script this season as well?

IPL 2020: Is the Sanju Samson tale following a similar script this season as well?

The talented right-hander had made batting look ridiculously easy and was the emperor of all that he surveyed.

After the first two games of the 13th edition of the IPL, it seemed as if Sanju Samson could do absolutely no wrong. The talented right-hander had made batting look ridiculously easy and was the emperor of all that he surveyed. He had battered the Chennai Super Kings’ bowlers into submission in his first game of this season, smashing a 32 ball 74.

The right-hander followed that up with a dazzling 85 in his next innings, as Kings XI Punjab bore the brunt of his effortless mastery this time. So, Sanju Samson had well and truly arrived, isn’t it?

But then, in the next three games, the prodigiously talented right-hander again flattered to deceive as he could muster just 12 runs in his next three innings put together. So, is the pattern going to repeat again this season?

2019 – When Samson set lofty expectations only to fizzle away

This is not the first time when Samson has started brightly only to fizzle away. Even in the previous edition of the IPL, Samson started extremely well by scoring a sublime hundred against Sun Risers Hyderabad in the second game. But then, his returns dwindled after that. In the table below, let us have a look at all of Samson’s performances in the 2019 edition of the IPL. 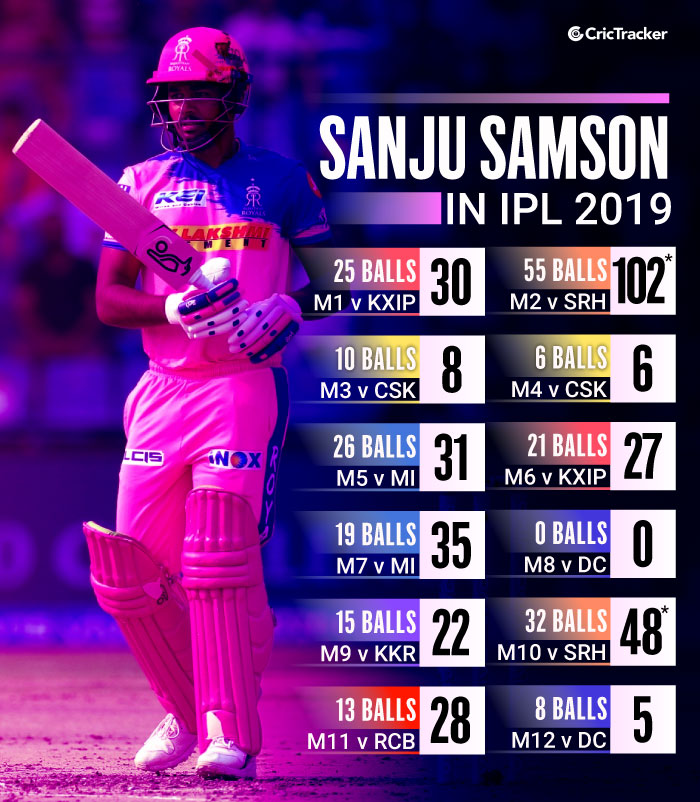 Samson set the stage alight with a blistering hundred in the second game of the 2019 edition against the Sunrisers Hyderabad side. But then, after that century, Samson could not even cross the 50 run mark even once in the previous edition.

Also, what is even more worrying is the fact that Samson was dismissed for a score of less than 30 in 7 out of the 10 innings he played after he scored his century. Also, after his century against Sunrisers Hyderabad, Samson did not even face more than 40 balls in an innings during the entire edition.

Even in the year 2018, a similar pattern unfolded. In the table below, let us delve into Samson’s performances in the 2018 edition of the IPL. 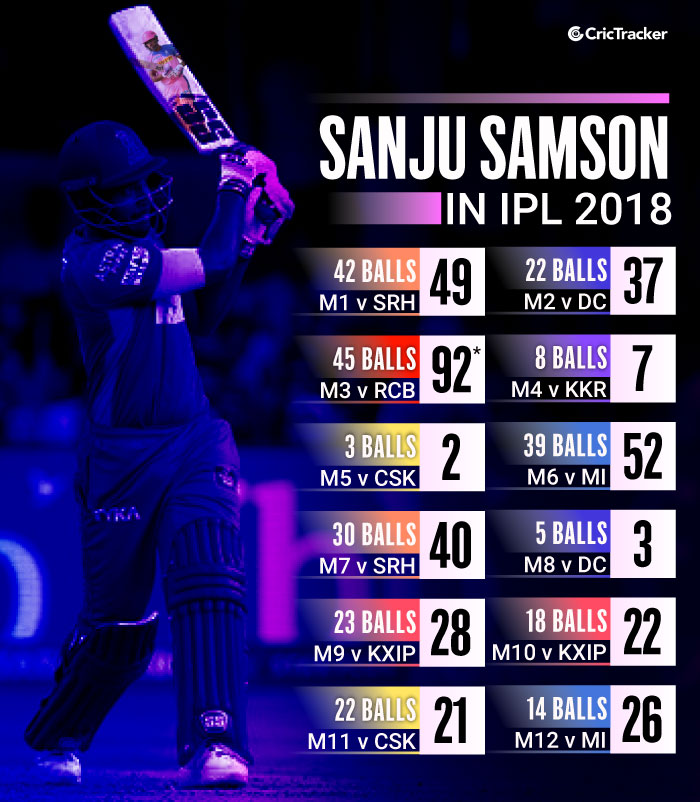 In the 2018 edition, Samson took the Bangalore bowling attack to the cleaners by smashing an alacritous 45 ball 92* in the third game. But then, after that innings, Samson’s fortunes went downwards. In fact, in his next 12 innings, Samson was dismissed for a score of less than 30 on 9 occasions, and his lack of consistency was glaringly visible.

Yet again, Samson did not even face 40 balls in any of the innings he played after his unbeaten 92 against Bangalore.

Consistency is his biggest problem

Will a similar script unravel this season for Samson yet again? Or, can the right-hander put an end to this trend? Well, we shall have to wait and watch.

Note: All stats have been taken from Howstat cricket and Cricinfo and have been updated as on 6th October 2020