The viewers will be expecting to witness some aggressive game of cricket from KKR's side owing to the presence of players like Sunil Narine, Shubman Gill, Dinesh Karthik and Andre Russell.

The two-time champion The Kolkata Knight Riders (KKR) has often been tagged as one of the stronger camps in the Indian Premier League (IPL) history. The team defied all odds and came up with great performances to keep their fans interested in the last edition of the Indian Premier League but wasn’t fortunate enough to make it to the playoffs as it finished fifth on the points table.

However, the team looks well settled for their stint in the 2020 edition of the Indian Premier League, which is slated to commence from September 19 across three venues namely Dubai, Abu Dhabi and Sharjah in a biosecure bubble.

KKR will be aiming to plug the holes that emerged last year with the new additions in the team that includes the likes of Australia’s Pat Cummins and England’s Eoin Morgan. Also, the viewers will be expecting to witness some aggressive game of cricket from KKR’s side owing to the presence of players like Sunil Narine, Shubman Gill, Dinesh Karthik and Andre Russell.

KKR to begin their campaign on September 23 against MI

The Kolkata Knight Riders will begin their campaign on September 23 with a match against Mumbai Indians followed by another fixture on September 26 against Sunrisers Hyderabad at the Sheikh Zayed Cricket Stadium in Abu Dhabi. The franchise will then head to Dubai for locking horns with Rajasthan Royals on September 30 before moving to Sharjah for their play with Delhi Capitals on October 3.

Heading back to Abu Dhabi, the Knight Riders will feature in two matches against Chennai Super Kings and Kings XI Punjab on October 7 and October 10 respectively. It will be a day affair between KKR and KXIP.

They will then play the Royal Challengers Bangalore in Sharjah on October 12 followed by four consecutive matches in Abu Dhabi against MI, SRH, RCB and DC on October 16, October 18, October 21 and October 24 respectively. Two out of these four matches, one against Sunrisers Hyderabad and Delhi Capitals will be played in the afternoon from 3:30 pm.

Kolkata will then clash with Kings XI Punjab in Sharjah on October 26. Following this, they will finally play their last two league stage fixtures of the 2020 campaign against Chennai Super Kings and Rajasthan Royals on October 29 and November 1 respectively. 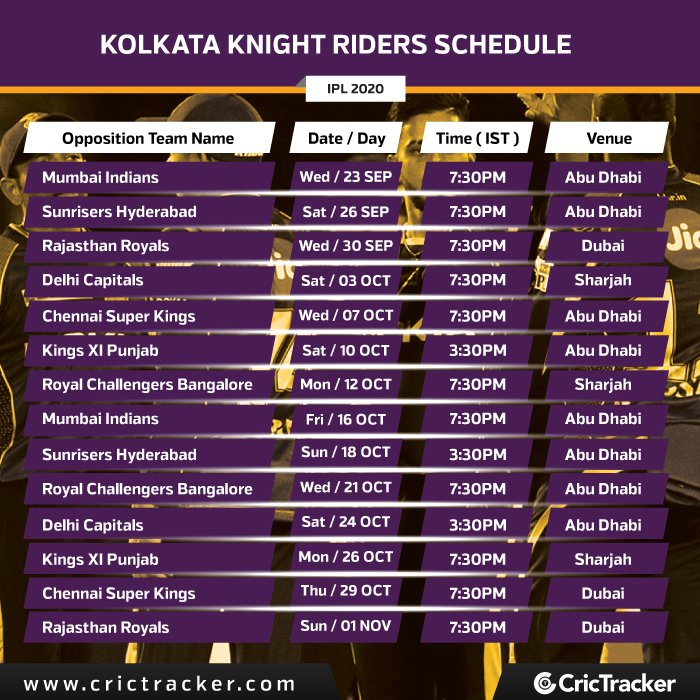