Shikhar Dhawan's knock made the difference between the two sides during DC vs RR.

After losing to Mumbai Indians, the Delhi Capitals returned to winning way while defending a similar target against the Rajasthan Royals. Fifties from Shikhar Dhawan and Shreyas Iyer got Capitals to finish on 161/7 despite a poor finish. The Royals began the chase in the same fashion as the Mumbai Indians on Sunday but losing Stokes, Samson and Parag in space of 20 balls affected them. Uthappa and Tewatia didn’t show any urgency during their brief stay only to be undone against Delhi’s overseas pacers.

Shikhar Dhawan was surely the difference in the results of Delhi Capitals against MI and RR. During the game against MI, the opener did not show any sort of urgency almost at no stage. But against the Royals, the Delhi opener was on a roll straight away despite Jofra Archer struck twice in first three overs. The fall of wickets hardly mattered for Dhawan who raced to 30 in only 15 balls in the powerplay. He scored 27 runs from 18 balls during the middle overs before missing out on a reverse sweep. 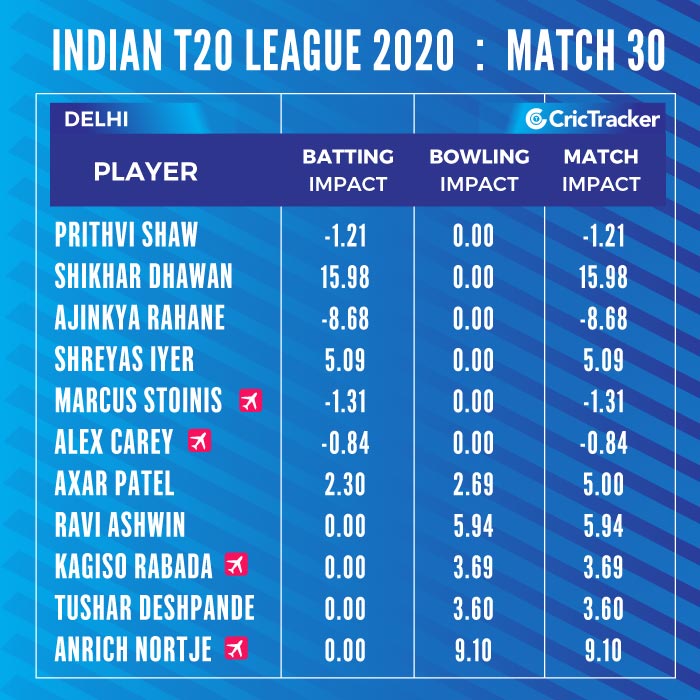 The knock of 57 off 33 balls by Shikhar Dhawan earned him the highest impact rating of DC vs RR as per the CricTracker’s Match Impact Rating. Dhawan’s inning holds an impact of 15.98 which was three times that of any other batsman of Delhi Capitals. The man of the Anrich Nortje got the 2nd best impact of DC vs RR for the winning team. The South African pacer got the big wicket of Jos Buttler in the powerplay and Robin Uthappa at the death to seal the match. This helped Nortje earn an impact rating of 9.10.

Ravichandran Ashwin’s tight spell also played a key role in Delhi’s victory earning him an impact of 5.94. The off-spinner gave away only 17 runs in his four overs and also picked up the wicket of Steve Smith. The most impactful bowling performance of the DC vs RR was recorded by Jofra Archer with his 3-wicket haul which got a rating of 9.26. Jos Buttler’s 9-ball 22 was the most impactful batting effort for the Capitals as the England keeper-batsman earned an impact rating of 12.23 but ended up on the losing side. 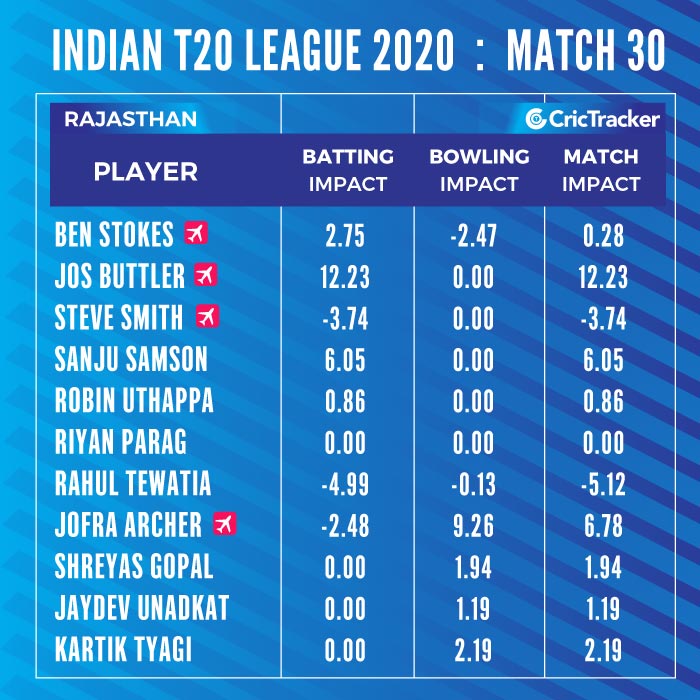