Delhi Capitals have got enough resources to trouble the batting of Chennai Super Kings.

The consistent Delhi Capitals will look to continue their domination at the top of the table when they face Chennai Super Kings on Saturday night. Despite the absence of Rishabh Pant, the Delhi franchise pulled off a thriller against the Rajasthan Royals. The Capitals did beat the Super Kings by a huge margin earlier in the tournament and would like to replicate the same. The MS Dhoni-led team is aiming to get on a winning streak to have a shot at playoffs having lost five matches.

Deepak Chahar will be crucial for CSK’s chances of Saturday with his new-ball spell. In the match against SRH, Chahar bowled his four overs on the trot with the new ball and gave away only 28 runs without picking a wicket. Against Delhi Capitals, he will against Shikhar Dhawan and Prithvi Shaw who have struggled against him in the past. Prithvi, especially, got out four times in five meetings thus far. Even Ajinkya Rahane, the No.3 batsman of Delhi has been dismissed three times in three innings against Chahar. 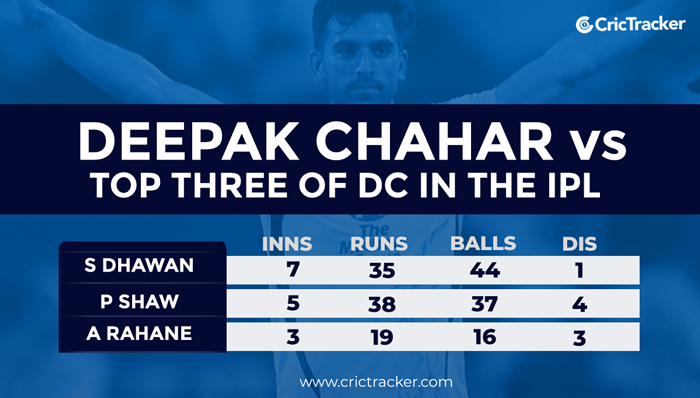 Shane Watson was moved to No.3 in the previous game to counter SRH’s move of bringing in Shahbaz Nadeem. The Australian all-rounder will be under threat of a left-arm spinner against Delhi Capitals too. Watson will be up against Axar Patel on Saturday against whom the Aussie has been dismissed six times in eight IPL innings. Given the presence of speedsters in form of Rabada and Nortje, CSK might not be confident enough to get Sam Curran opening again. Watson needs to be lucky enough to survive and get a big score under his name. 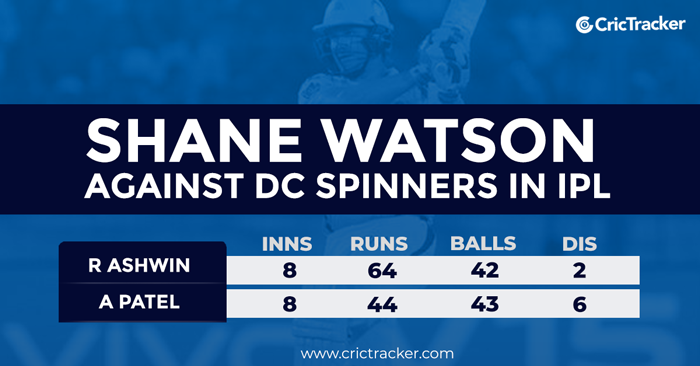 Kagiso Rabada has been exceptional at the death overs in IPL 2020 as he bagged as many as 13 wickets across the 13.4 overs he bowled during the last five overs. He has picked those wickets at an average of 8.5 and a strike rate of 6.46. Rabada’s economy rate of 8.12 during the death overs is quite impressive as he has been making things tough for the opponents in the backend. His pairing with Anrich Nortje won’t make things easy for the Chennai Super Kings who are used to score big runs in the final five overs.