Shikhar Dhawan won the player of the match award despite ending up on the losing side.

Kings XI Punjab continues to bag wins against the top teams as they defeated RCB, MI and DC in the previous three matches who all are placed in the top three of the points table. The KL Rahul-led team earned two points following their 5-wicket victory against Delhi Capitals. The table-toppers, Delhi franchise, completely relied on Shikhar Dhawan during their batting inning during KXIP vs DC. The Indian limited-overs opener smashed an unbeaten 106 from 61 balls with 12 fours and three maximums.

Shikhar Dhawan, in this process, became the first player in IPL history to smash successive tons. No player other than Shikhar managed to score even 15 runs for the Delhi team who crawled to 164/5. This knock helped Dhawan to earn an impact rating of 26.52 which is the highest during KXIP vs DC as per the CricTracker’s Match Impact Ratings. Dhawan’s knock holding high impact in the game was one of the reason by a century on losing side in the IPL won a player of the match award for the first time since 2016. 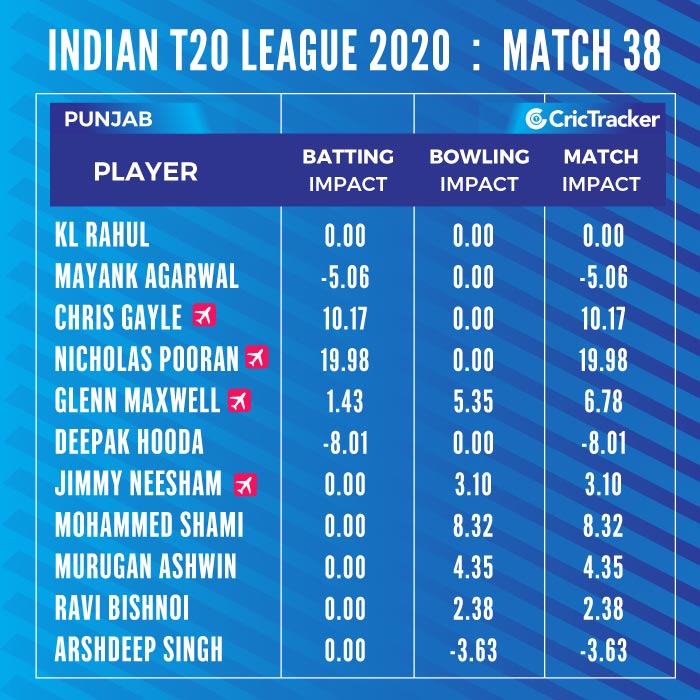 The West Indian duo of Chris Gayle and Nicholas Pooran were simply outstanding in their approach during KXIP vs DC. Knowing his threats in the form of Ravichandran Ashwin and Kagiso Rabada, the Universe Boss smashed Tushar Deshpande in the 5th over. At one stage, he struck five successive boundaries including two sixes. Gayle eventually got bowled for a 13-ball 29 in Ashwin’s bowling but his brief knock got an impact of 10.17. Pooran, on the other hand, smashed a quick-fire fifty to bring the required rate below six.

The southpaw smashed six fours and three sixes during his 28-ball 53 as Kings XI Punjab were scoring at a run rate of 10 until Pooran’s dismissal. The impact of the batting performance by Pooran measured at 19.98 which is by far the highest among KXIP players during KXIP vs DC and only behind that of Dhawan. Among the KXIP bowlers, everyone except Arshdeep Singh earned positive impact rating. Mohammed Shami’s analyses of 4-0-28-2 got a rating of 8.32 which is the best among KXIP bowlers. 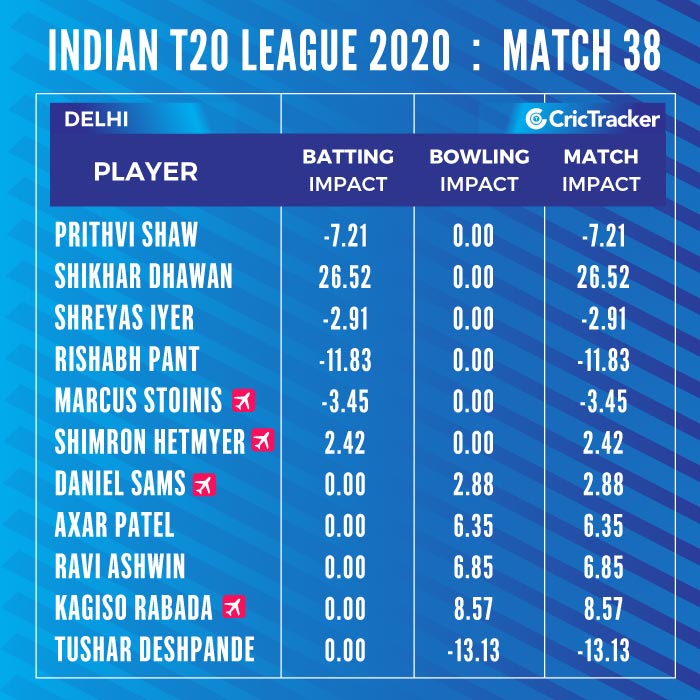