Chennai Super Kings got their 4th win of IPL 2020 with a collective effort against RCB.

Chennai Super Kings put a break to their 3-match losing streak as they got the better of Royal Challengers Bangalore on Sunday by eight wickets. On a track where Kings XI Punjab successfully defended their total of 126 on Saturday night, the RCB team decided to bat first and looked for getting only 150. Their intent less batting against spin in the middle overs during RCB vs CKS didn’t work well as they got only 145/6 in their 20 overs as they completely failed to score quickly against the slower balls from the CSK pacers at the death.

The intent was one of the reasons why Virat Kohli nearly earned absolute 0 impact as per CricTracker Match Impact Ratings for his 43-ball 50 in which there were only two boundary hits. AB de Villiers, on the other hand, hit four boundaries during his 36-ball stay but scored just 39 runs, fetching him a negative impact of -1.40. Sam Curran’s change of pace did work for his as the all-rounder claimed three wickets in the three overs he bowled on Sunday. The southpaw finished with the best bowling impact during RCB vs CSK of +8.67. 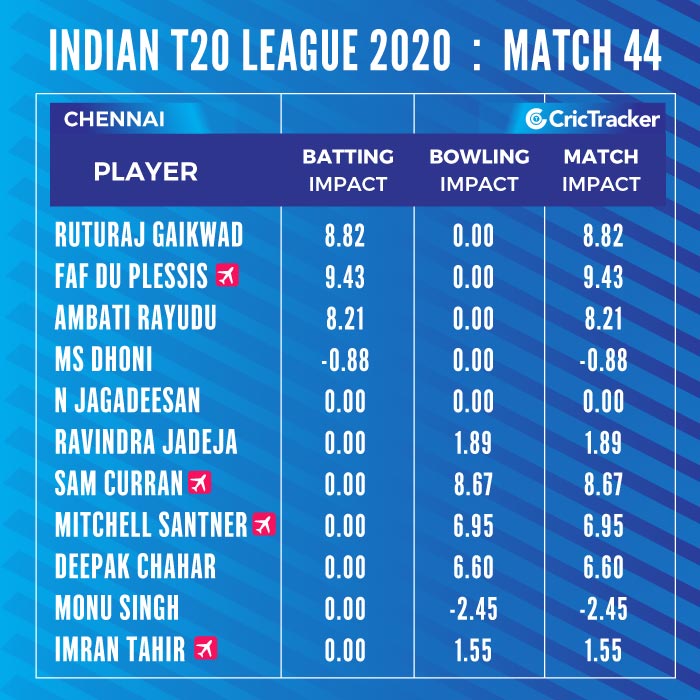 Mitchell Santner, playing his first game of the season, conceded only 23 runs in his four overs and also got the wicket of Devdutt Padikkal straight after the powerplay. This fetched him an impact rating of +6.95 which was the highest among the spinners during RCB vs CSK. Super Kings did take a cue from the RCB inning and planned their chase brilliantly. The Chennai Super Kings‘ openers Faf du Plessis and Ruturaj Gaikwad took the RCB bowlers in the powerplay and ended up adding 46 in only 5.1 overs for the opening wicket.

Du Plessis raced to a 13-ball 25 to bring down the required rate well under seven before getting dismissed. This helped the South African to earn the highest impact rating during the RCB vs CSK of +9.43. Ruturaj kept the score ticking from one end while Ambati Rayudu got the better of RCB pacers. Rayudu smashed a 27-ball 39 with help of five boundaries which got him an impact of +8.21. Ruturaj, the player of the match, finished unbeaten on 65 from only 51 balls helping him an impact rating of +8.82. 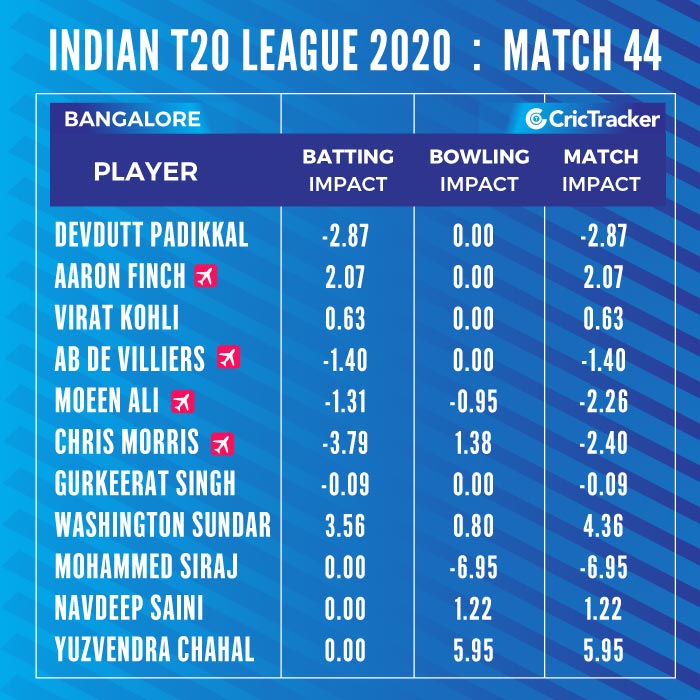