Who got the best match impact ratings?

Mumbai Indians completed a double against the Delhi Capitals in IPL 2020 as they cruised to a 9-wicket win thanks to a collective effort with the ball. The Delhi batters struggled through their innings as they finished with only 110/9 during DC vs MI. The top six of Delhi containing International stars collected just 69 runs from 82 balls. The total was never going to be enough against the Mumbai Indians who are the table toppers and also the defending champions. The chase was finished in only 14.2 overs for the loss of only one wicket.

Ishan Kishan might be lucky to have got the player of the match ahead of the bowlers who laid the platform for the defending champions by restricting Delhi to a low total. However, the Jharkhand keeper’s knock was a special one considering the bowlers he was up against and the tricky conditions for the batsmen in DC vs MI. The pitch in Dubai which was used after almost three weeks did enough to make the batters struggle with their timing. The spinners got a bit of turn from the pitch while the speedsters got the ball to seam around. 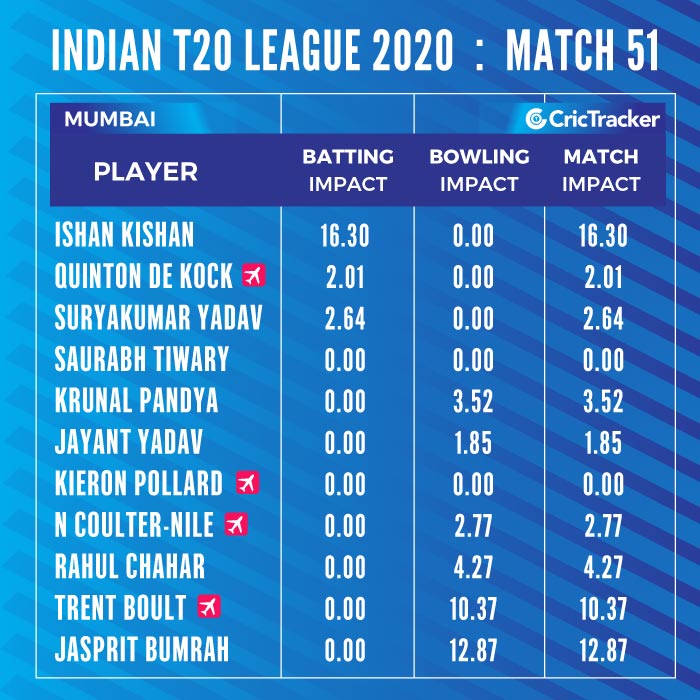 Ishan’s unbeaten 47-ball 72 came with the help of eight fours and three maximums. This knock fetched an impact of +16.30 which was the highest match impact for any player as per CricTracker’s Match Impact Ratings. It was no surprise the top efforts with the ball during DC vs MI belong to Jasprit Bumrah and Trent Boult. Bumrah took out Marcus Stoinis and Rishabh Pant in the same over to break the back of Delhi’s batting and finished with three wickets; all coming in the same spell.

Bumrah’s analyses of 4-0-17-3 got him an impact of +12.87 while the left-arm pacer Boult got +10.37 for his figures of 3/21. Ravichandran Ashwin was Delhi Capitals’ best performer by a fair margin during DC vs MI. Ashwin first scored 12 off 9 balls and was one of the two batters with 100+ strike rate for Delhi. He later contained the left-handed openers of Mumbai Indians conceding only 18 runs in his four overs. Ashwin’s short all-round efforts got him an impact of +8.86 which was the 4th highest for any player in the game. 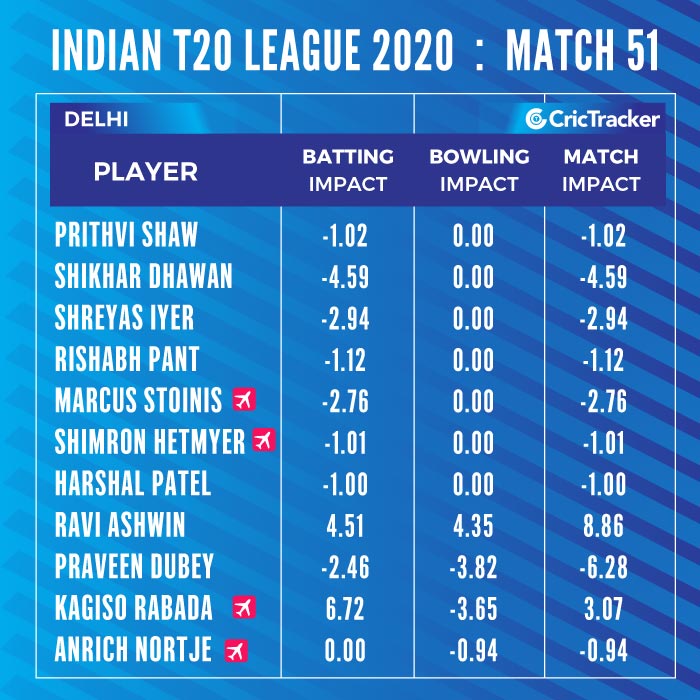