MI and DC will face-off in the final.

After 59 thrilling matches in the 13th edition of the Indian Premier League (IPL), we are down to two best teams, Mumbai Indians (MI) and Delhi Capitals (DC) fighting it out for the glory. The title clash will take place at the Dubai International Cricket Stadium on Tuesday and the tournament which began on September 19 with COVID-19 cloud on it, has been carried out successfully by the BCCI.

The Rohit Sharma-led MI is set to play its sixth final and for the first time, they will be facing the team which doesn’t have MS Dhoni. In all the previous five finals they played, Dhoni was part of the Chennai Super Kings (CSK) four times and Rising Pune Superigant (RPS) once (in 2017). The Capitals, under Shreyas Iyer’s inspired leadership, is playing its first final in 13 seasons and will be keen on turning the tables.

Ahead of the final, the fans are interested in knowing the winning amount that will be given to the winners and the runners-up.

How much will the IPL 2020 champion team earn?

The IPL 2020 winning team will get a whopping amount of Rs 20 crore as an award for their efforts throughout the season. The runners-up, who will end up short in the final, will take home Rs 12.5 crore. The third and the fourth places teams, Sunrisers Hyderabad (SRH) and Royal Challengers Bangalore (RCB) will get Rs 8.75 crore each for making it to the playoffs.

SRH were sensational in the second half of the tournament winning their last three matches against MI, DC and RCB. In the eliminator, they once again beat RCB, led by Virat Kohli, but fell short by 17 runs in the steep chase against the Capitals which ended their spirited campaign. The Royal Challengers, on the other hand, have themselves to blame as they lost their last five matches and botched up the opportunity to make it to top two. 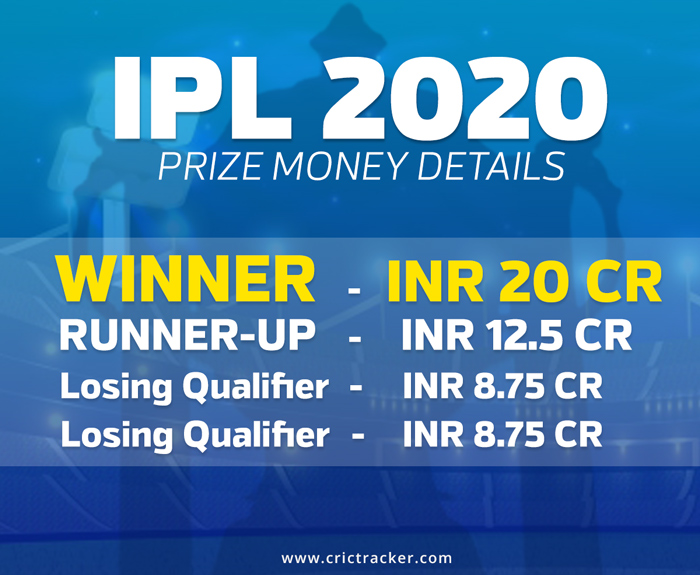