What's the amount of money won by the tournament's award winners?

The final showdown of the much-awaited 13th edition of the Indian Premier League underwent in the iconic Dubai International Stadium amidst cathedral-like-silence. This time it was four-time title contenders locking horns against the cup-deprived Delhi Capitals. Fans beamed with joy and cheers from the comforts of the couch as the power-packed Mumbai outfit went all guns blazing against the off-coloured Delhi-based outfit.

Going unchanged and unfazed, Delhi Capitals intended to play the fearless brand of cricket which has worked wonders for them in the ongoing season. However, Mumbai skipper Rohit Sharma decided to make a tactical amendment as Jayant Yadav replaced the budding youngster Rahul Chahar.

Choosing to bat first, Shreyas Iyer and his knights could not make a dream start as the swanky side experienced initial tremors. The opening duo- in the form of Marcus Stoinis and Shikhar Dhawan could not live up to the billing. While the former departed without troubling the scoreboard, the latter was bowled out after scoring a meagre 15 runs in the high-voltage match. Steadying the team’s ship, Rishabh Pant along with Shreyas Iyer stitched a 96-run stand which took the team total to 118 runs after the end of 15 overs.

Although Rishabh Pant was dismissed by Nathan Coulter Nile, Shreyas made the most out of the batting-friendly surface. Playing the captain’s innings, the Mumbai-based batsman notched 65 unbeaten taking the team’s scoreboard to a respectable target of 156 runs. It comes as no surprise that Mumbai speedster Trent Boult sent chills down the spines of Capitals. The New-Zealander grabbed 3 crucial breakthroughs trammelling Delhi to not pose a daunting target.

In response, the experienced opening duo in the form of Rohit Sharma and Quinton de Kock proved their mettle giving the team a rock-solid partnership for the first wicket. The South-African top-order decimator racked 20 runs laced up with 3 fours and 1 six before sneaked past an edge to the delivery of Marcus Stoinis. At 45 for 1 in 4.1 overs, there was no looking back for the champion side. The power-hitter Surya Kumar Yadav continued his impeccable stint as he scored 19 runs before sacrificing his wicket for his compatriot.

Although the Mumbai camp witnessed a small hiccup at the end, nothing could stop the team from scripting heroics once again. The premier batsman Rohit Sharma was caught out after mustering 68 runs against the lethal bowling line up. Wrapping up the formalities, Krunal finished off things in style with a solitary run. Alongside the Baroda-based cricketer was Ishan Kishan who amassed quick-fire 33* runs. Hence, the party in the MI dressing room will take over the gloominess in the Covid-riddled year after a hard-fought triumph. 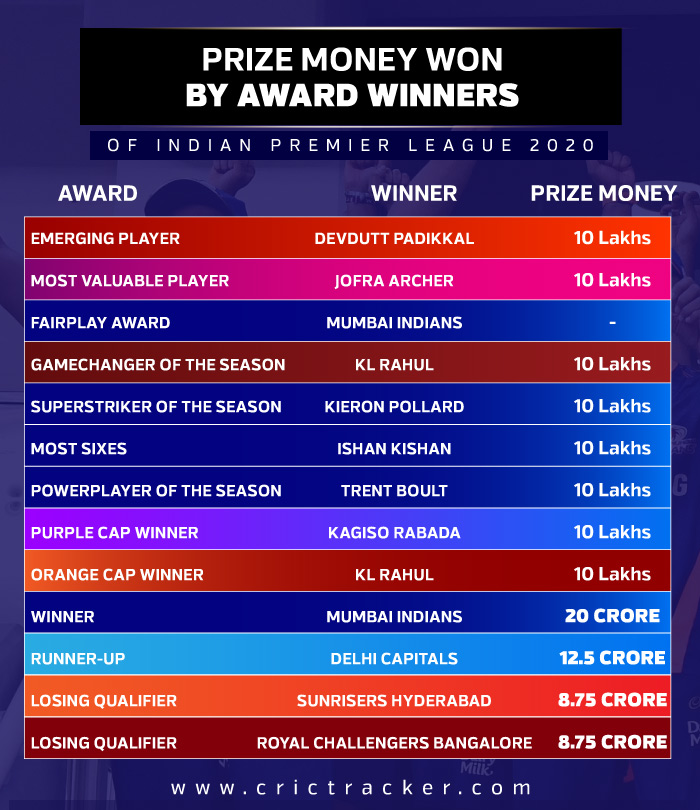