IPL 2020: Qualifier 1, MI vs DC – Bumrah’s success with the ball and Pollard’s excellence at the death

IPL 2020: Qualifier 1, MI vs DC – Bumrah’s success with the ball and Pollard’s excellence at the death

The table-toppers Mumbai Indians take on the Delhi Capitals in the first qualifier of IPL 2020.

Mumbai Indians produced a near-perfect performance during the league phase except for the final game against the Sunrisers Hyderabad where they suffered a 10-wicket defeat. However, the loss might not affect MI’s confidence during the playoffs as they went into the game without top two leading wicket-takers. They will be facing Delhi Capitals during the first Qualifier in Dubai on Thursday. Mumbai had defeated Delhi at the same venue during the previous week only.

Where should Bumrah bowl?

Jasprit Bumrah has excelled with the ball in almost all the phases in the IPL 2020. The presence of Trent Boult and one of James Pattinson and Nathan Coulter-Nile didn’t let Bumrah have many powerplay overs. But whenever he was given the ball, he struck gold for Mumbai Indians by picking five wickets in only 14 overs. In the middle overs, Jasprit claimed six wickets across 15 overs while going at an economy rate of 5.67 only.

Mumbai Indians could once again delay the entry of Jasprit Bumrah as the Delhi Capitals’ top-order batters have often got away while facing the MI pacer. His 3-wicket haul earlier on Saturday caused a collapse to the Delhi at the same venue where the two teams will clash in the first qualifier. If there is a bit of help with the new ball, Trent Boult could well contain the Delhi’s top three like he did in the league phase.

Can Pollard continue his batting form?

Kieron Pollard is having a great year in the T20 format in 2020 as he led the Trinbago Knight Riders to CPL title and has delivered for the Mumbai Indians whenever they were in trouble. In IPL 2020, Pollard has been striking at 221.8 during the death overs which is only the 2nd season where he has struck at 200+ strike rate in the death overs after his debut IPL season (227.8 in 2010). In between the two seasons, Pollard had 150+ strike rate at death in six editions and MI went on to win the title in five of them. 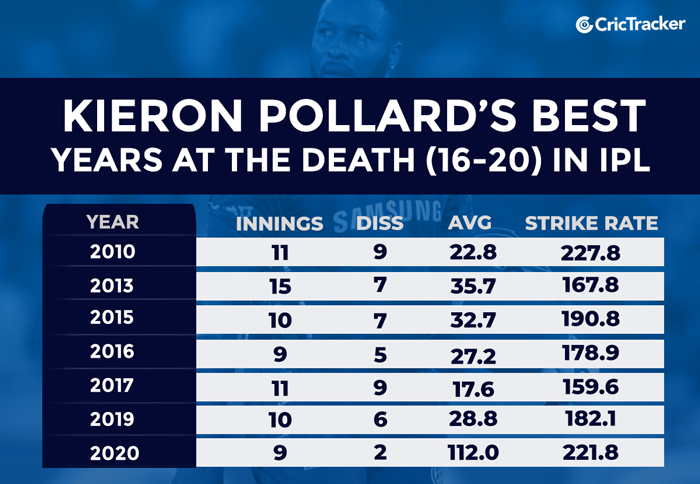 The batting form of Delhi Capitals in the last two weeks hasn’t been an inspiring one which contributed to their 4-match losing streak before defeating RCB. While Shikhar Dhawan has stepped up often in Delhi’s wins, their skipper Shreyas Iyer hasn’t been at his best barring a couple of knocks early on in the tournament. His numbers against left-arm spin and leg-spinners are pretty poor in IPL 2020 and against MI, he will be up against Rahul Chahar and Krunal Pandya. Hence, the qualifier is going to be a big challenge for the Delhi Capitals and their captain. 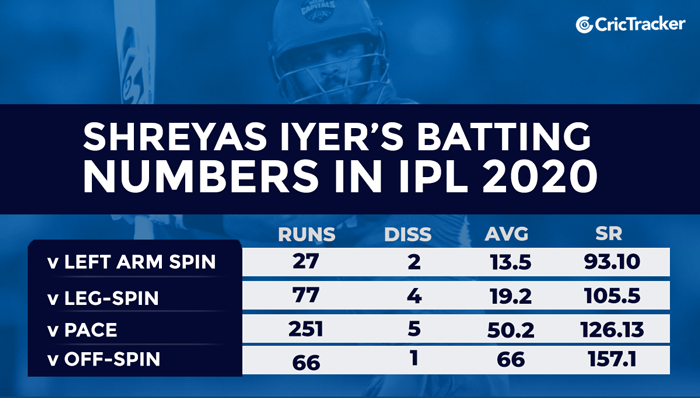