For the first time in season-long fantasy, you can make changes after each match. 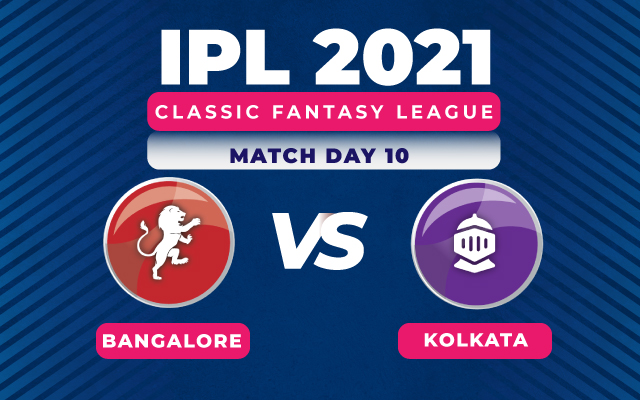 The first doubleheader in the IPL season 2021 begins on 18th Apr. The first match is between Royal Challengers Bangalore (RCB) vs Kolkata Knight Riders (KKR) at 3:30 PM IST in Chennai. The second match of the day starts at 7:30 pm between Delhi Capitals (DC) vs Punjab Kings (PBKS) in Mumbai.  This is a two-part article covering the Season Long Fantasy League team setup for both the matches, Match 10 and 11.

The last matches for both RCB and KKR have turned out to be low-scoring nail-biting thrillers. While RCB have won their last match against SRH in a dramatic way, KKR have lost their match in an unbelievable manner. RCB are likely to start with their winning team, while KKR may make minor changes to their last playing XI.

Note: In the last match T. Natarajan did not play. So we have replaced T. Natarajan (SRH) with Nitish Rana (KKR) instead of replacing Arshdeep Singh (PBKS) with Shahbaz Ahmed (RCB) as discussed in the previous article.

Number of Transfers: One (+ One uncapped)

David Warner (SRH), Manish Pandey(SRH) : SRH are going to play their next match in five match span. So, there is absolutely no need for any SRH Players.

Virat Kohli (RCB): If KKR bats second, we will take Virat Kohli into our fantasy team as a captaincy option. Kohli is opening the batting for RCB and is likely to score big.

Shahbaz Ahmed (RCB): Shahbaz Ahmed (RCB) is coming one down in the batting order and bowls a few overs. Considering his all-round potential, we want to transfer him for today’s match. Since KKR have good left-handed batsmen through their line-up, he might not get to bowl more overs.

After Toss, if we get any hint that Shahbaz will not bat at three, it’s better to go with the other uncapped players available for this match. The order of preference would be 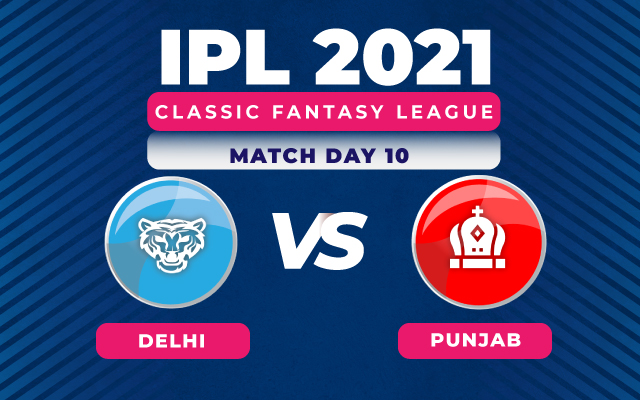 Both the teams are coming to this match after putting up a poor batting show in their previous matches. While Delhi Capitals did better in the bowling department against Rajasthan Royals, Punjab Kings’ big overseas signings have disappointed a lot in the bowling department. With both Kagiso Rabada and Anrich Nortje featuring in this match, it will be interesting to see how the shaky Punjab Kings batting lineup withstand.

In Match 8, we transferred the Punjab Kings players into our season fantasy team and we carried them till this match. Delhi Capitals (DC) are going to play two matches in a span of three days on two different venues. So, it is good to transfer out any of the KKR, RCB and SRH players and replace them with as many DC players as possible.

Nitish Rana (KKR), Shahbaz Ahmed (RCB), Andre Russell (KKR)/Virat Kohli(RCB): Before each of these teams (RCB, SRH, KKR) play their next match, DC will be playing two matches. Hence, all these players will be transferred out.

Rishabh Pant (DC): Rishabh Pant is in good form. He batted well even when the entire team failed badly in the last match. His wicket-keeping fantasy points are a bonus.

Shikhar Dhawan (DC): Shikhar Dhawan was in great form but he disappointed in the last match. Hopefully, he will play good innings before DC leaves Mumbai and moves to their new playing venue (Chennai) this season.

Other Players (DC): We only have a provision for two transfers. So, we could not make more than two transfers. If it’s possible for you, we would suggest you to make more transfers since DC plays their next two consecutive matches with one day gap. If a player fails in one match, they can come good in the other match.

Avesh Khan (DC): Avesh Khan bowled brilliantly in the last couple of games. Now, with the likes of Rabada and Nortje, he will only go from strength to strength.

Our Fantasy team for Match 11 – DC vs PBKS