If DC are chasing, Dhawan is a good option to make captain. 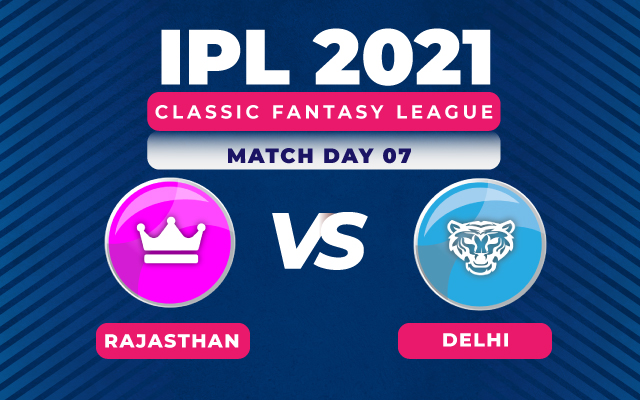 The seventh match in this IPL 2021 season will start at 7:30 PM IST between Rajasthan Royals (RR) and Delhi Capitals (DC) in Mumbai. In this article, let us discuss the Season Long Fantasy League team setup for Match 7.

We currently have two players from RR for this match in our fantasy team. We will make two more transfers along with one uncapped transfer. It is not just RR, but also the fantasy teams are going to miss Ben Stokes, the first choice fantasy team captain.

Virat Kohli (RCB), Harshal Patel (RCB): RCB are playing their next match in four days span, So we are transferring out these two RCB players.

Ishan Kishan (MI): We have to transfer one more player and we could see the only option in Ishan Kishan. Ishan Kishan is not keeping the gloves and coming in second down. Punjab Kings are playing their next matches two matches in four days span. So, we will be able to manage with KL Rahul as our fantasy team Wicket Keeper. Hence transferring out Ishan Kishan from our fantasy team.

Manan Vohra (RR): DC is filled with left-right hand player combinations in the top and middle order. So players like Rahul Tewatia will not get many overs to bowl. So we want to see if Manan Vohra could make some runs considering the pitch advantage.

Rishabh Pant (DC): Rishabh Pant is one good player for this match. He is in great form and is keeping the wickets as well. Our only concern for him is that he may come late in the batting order, to finish the matches, especially while batting second. If DC bats first, he will be a very good option to consider.

Marcus Stoinis (DC): Delhi will still be missing their prime bowler Anrich Nortje for this match. So, Stoinis will end up bowling a few overs. Same like Rishabh Pant, even Stoinis might be stuck to finisher role and come late in the batting order, while batting second. If DC bats first, he will be a good option to consider.