Samson weaved his blistering knock around a single four and 9 towering sixes, smashing boundaries for fun against the likes of Ravindra Jadeja and Piyush Chawla.

In their opening fixture of IPL 2020, Steve Smith-led Rajasthan Royals were put in to bat first by Chennai Super Kings. Aiming to get off to an explosive start, the Rajasthan franchise introduced a fresh opening pair of a young Yashasvi Jaiswal and skipper Smith.

After witnessing Devdutt Padikkal’s impressive show against Sunrisers Hyderabad, fans were expecting 18-year-old Jaiswal to put up a similar performance with his willow. However, the youngster was dismissed off a short-ball delivery bowled by Deepak Chahar.

Denting RR with an early blow, CSK were hoping to scalp another wicket to put Smith and Co under the pressure. However, Sanju Samson stunned the Yellow Army with his rampage. 25-year-old Samson stitched a whirlwind 74-run knock off just 32 deliveries to leave CSK gasping for breath. He weaved his blistering knock around a single four and 9 towering sixes, smashing boundaries for fun against the likes of Ravindra Jadeja and Piyush Chawla.

In the process, the Kerala stalwart also paved his way into the list of highest-fifties in IPL for Rajasthan Royals. Samson now stands second joint in the list after hitting his half-century in just 19 deliveries. Samson is tied with Owais Shah, who had also smashed 19-ball fifty against Royal Challengers Bangalore in IPL 2012.

The first in the list is England’s wicketkeeper-batsman Jos Buttler. He had smashed a half-century in just 18 deliveries in an IPL 2018 encounter against Delhi Capitals. Opening the innings with D’Arcy Short, Buttler had slammed 67 off 26 deliveries including 4 fours and 7 sixes. Next in the list are Shane Watson and Yusuf Pathan. While Watson had slammed a 21-ball half-century against CSK in 2010, Yusuf had scored two 21-ball fifties in IPL– one against DC in 2008 and the other against MI in 2010.

Rajasthan Royals, meanwhile, are eyeing to register a victory against CSK and start their IPL 2020 campaign on a positive note. After his brutal knock, Samson was eventually dismissed on 74 by Lungi Ngidi in the 12th over. He tried to slash it over covers but Chahar leapt to take the catch and put Chennai back in the contest.

After beginning their IPL 2020 campaign against Chennai, Royals are next slated to lock horns with Kings XI Punjab on September 27, followed by a game against Kolkata Knight Riders on 30th. 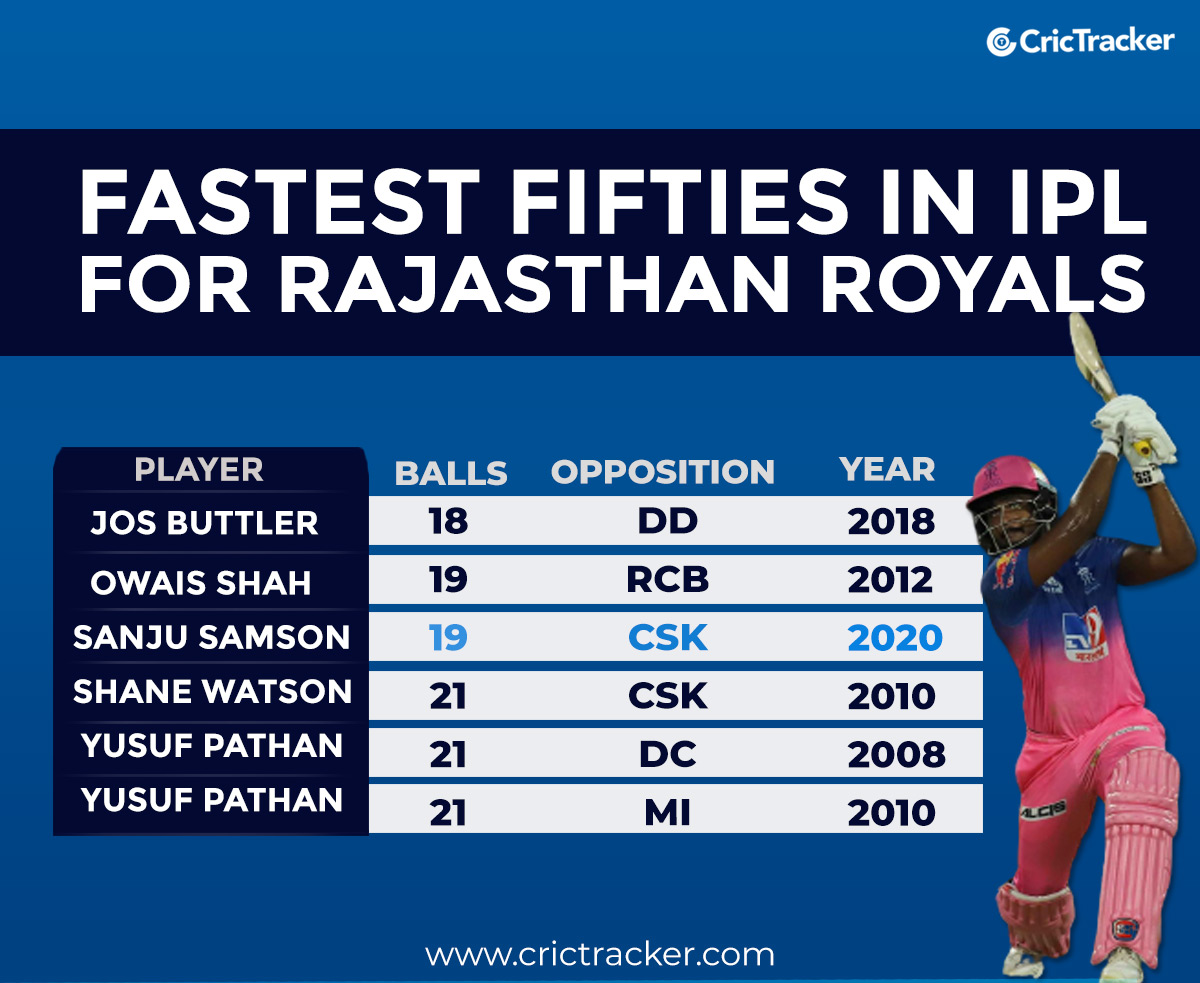