The Indian Premier League (IPL) is deemed as the best cricketing league across the world. While it provides the players with a great platform to pave the way for them into the national, international cricketers also try their best to make themselves available for the whole season. The top Indian players are always available for the T20 extravaganza which makes the IPL one of the most sought leagues and with the money involved in it, they are also the top earners over the last 11 years of the tournament.

Recently, the auction for the 12th season of the IPL took place in Jaipur where the uncapped Indian players were in demand. In the meantime, the list of top 10 earners in the competition is doing the rounds and the former Indian captain MS Dhoni is hogging the limelight. Including his salary for the upcoming season, the veteran has so far earned a massive amount of Rs 122.84 crores only by playing in the cash-rich league.

Leading the Chennai Super Kings (CSK), he has won the tournament thrice in nine years while turning up for the now-defunct Rising Pune Supergiant (RPS) in 2016 and 2017 when the Super Kings were suspended.

After MS Dhoni, expectedly two of the most followed cricketers in the fraternity, Rohit Sharma and Virat Kohli are in the list. India’s vice-captain has just pipped his skipper in this aspect. While Rohit has so far been paid Rs 116.60 crores while Kohli ends up with Rs 109.20 crores according to Inside Sport. The recently retired Indian veteran Gautam Gambhir stands fourth with total earnings of Rs 94.62 crores while the Mr. IPL (as they say) Suresh Raina has earned Rs 88.74 crores.

While the first half of the list is dominated by the Indian cricketers, the likes of AB de Villiers, Sunil Narine and Shane Watson make their presence felt at the seventh, tenth and eighth position respectively on the charts. Yuvraj Singh and Robin Uthappa are the other Indians as well who have been playing the tournament ever since its inception. 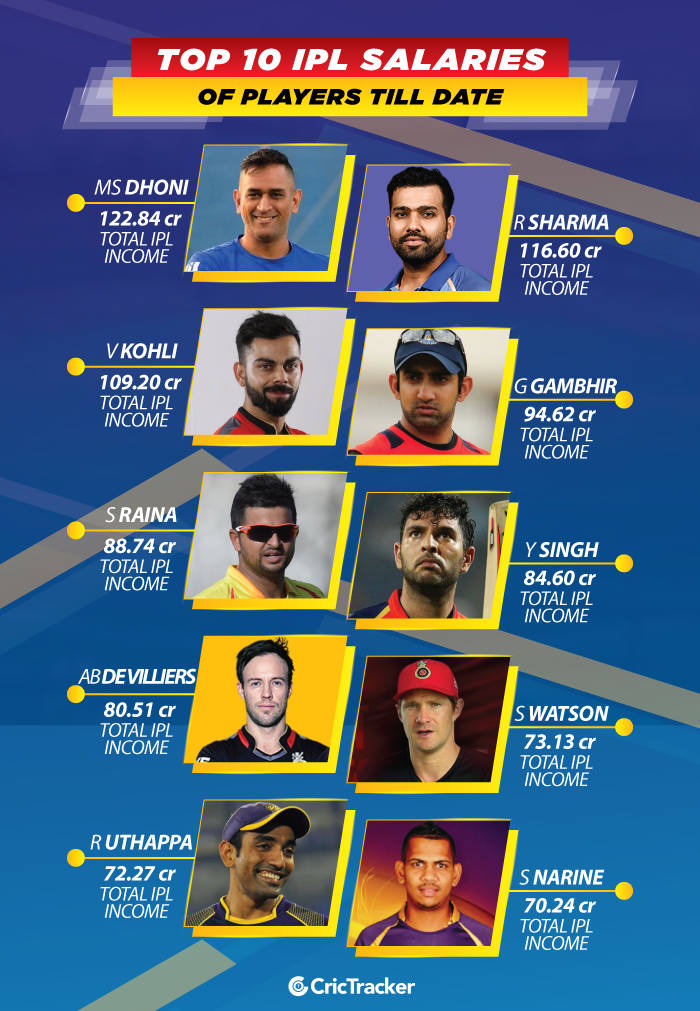