Bangladesh may bring back the four players, they rested in the dead rubber against Ireland.

It goes without saying that the triangular ODI series in Ireland has been dominated by Bangladesh. The Tigers are unbeaten in the tournament, having won all their three completed games with one match versus the hosts getting washed out. Subsequently, Mashrafe Mortaza & Co. finished the league stage at the top of the points table. Last night they comprehensively defeated Ireland by six wickets.

In that game, Bangladesh decided to rest some of their key players, the encounter being a dead rubber. Nevertheless, the stalwarts are expected to be back for the final against the Windies at The Village in Dublin. The Caribbean team, on the other hand, hasn’t had the best of outings by any means. Though Jason Holder’s men beat Ireland twice, their bowling has looked well short of firepower.

The pitch is speculated to be batting-friendly and bowlers won’t have much room for error. The fast bowlers need to shoulder a chunk of the responsibility as the deck won’t have much for the spinners. All the three games at this venue were won by the team, batting second.

The weather isn’t something to cheer about as there are chances of rain throughout the duration of the match. The temperature will be around the 13 degrees Celsius mark with the humidity inside the 50s. The cloud cover is significant with the percentages extending up to 98.

The Tigers may bring back Soumya Sarkar in place of Liton Das, despite the latter doing well last time. The management also may not want to risk Shakib Al Hasan, who suffered a side strain. Mohammad Mithun may come in his place. Mustafizur Rahman is likely to get in for Rubel Hossain. Abu Jayed should retain his position after his five-wicket haul in the erstwhile game.

The Windies would want to rope in Shannon Gabriel, replacing Raymon Reifer, who didn’t have the best of debuts in the previous contest. There’s no update on John Campbell’s back injury and hence Sunil Ambris will keep opening the batting with Shai Hope. Darren Bravo will be looking to cease his poor run of form, having scored 33 runs at an average of 11. Jason Holder also needs to lead from the front. 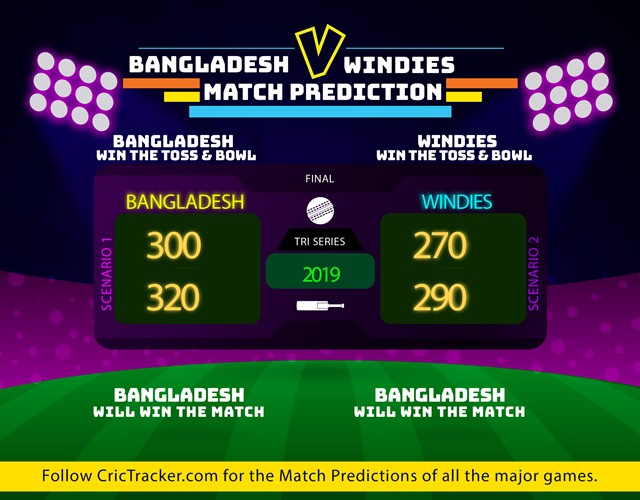