Having qualified for the Final, Mortaza’s men would be looking to give some of their benched players a chance to show their mettle.

Bangladesh has arguably been the most dominant team in the ongoing tri-nation ODI tournament. Mashrafe Mortaza and Co are through to the final after they defeated the Windies yesterday by five wickets at The Village in Dublin. The Tigers are placed at the top of the points table with 10 points. Their Net Run Rate of +0.465 is also a testament to their extent of authority in the series.

Their next game is scheduled tomorrow versus Ireland and irrespective of the result of the match, the Tigers will finish atop the points table. In fact, until now, Bangladesh is the only unbeaten team even as Windies and the Irishmen have lost two games each. Having qualified for the Final, Mortaza’s men would be looking to give some of their benched players a chance to show their mettle.

The 6th game of the Ireland Tri-Nation between Ireland and Bangladesh will be hosted by The Clontarf Cricket Club Ground in Dublin.

The weather forecast isn’t something to worry about for the players. The temperature will hover around the 16 degrees Celsius mark. The humidity will be around 50 per cent mark. There will be a bit of a cloud cover, but it won’t result in a downpour.

The first two games of the tri-nation series were played at this particular venue. Windies racked up 381 in the opening match and that shows the batting-friendly nature of the deck. The conditions will again be in favour of the batters and a high-scoring affair can be expected tomorrow.

Mohammad Saifuddin has back pain and didn’t play the last match. 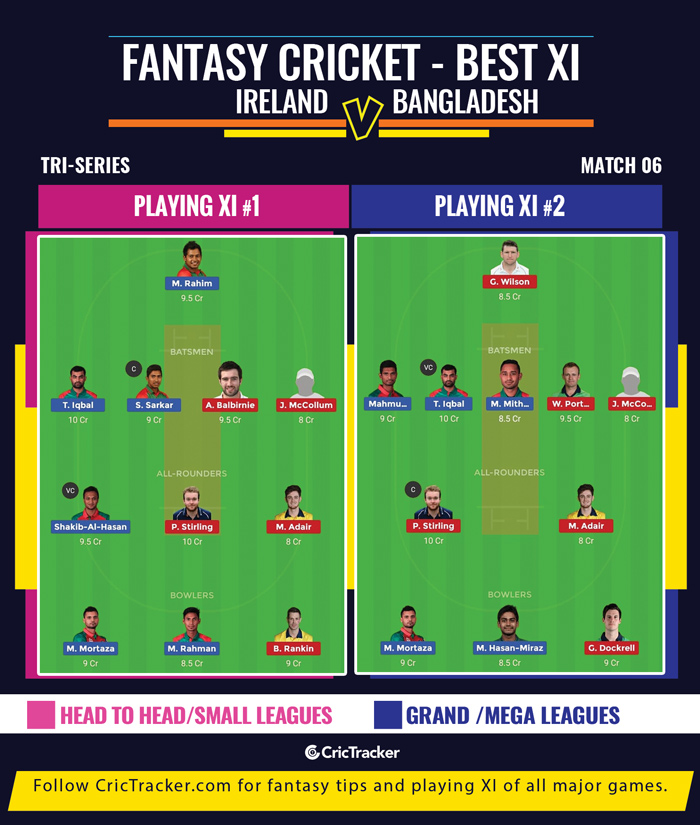 Pick more Bangladesh players. From Ireland, Andrew Balbirnie and Paul Stirling are must have in your lineup.