Ireland vs India, 1st T20I - Match Prediction: Who will win the match India or Ireland?

Ireland vs India, 1st T20I – Match Prediction: Who will win the match India or Ireland?

The No.17 ranked T20I side is hosting the No.3 placed side in this series but the unexpected can happen in the shortest format.

It isn’t really difficult to notice that all the excitement in Indian cricket at the moment is for the England tour and little about the two T20Is they play against Ireland. The team is, however, taking this seriously and will get crucial match practice before being grilled by the English team in their backyard. This is the first time these two teams will play a bilateral T20I series on the Irish soil and is a great opportunity for the home team to make it count.

Scotland had out of nowhere defeated England in an ODI to stun everyone. The same English team that mauled the Australians and crushed them in 5-0 in the ODI series that followed. Ireland would want to pull off a Scotland here but is certainly equivalent to a climb to the Everest. Heading into the game, the Indian team occupies the 3rd spot on the rankings whereas Ireland is No.17 which is lower than teams like Hong Kong and Oman.

Out of the 6 T20Is that had a result at the Village in Dublin five times the team batting second won the match which is an indication that it is a really good wicket to bat on. The dimensions of the ground make batsmen love this venue further. As far as the wicket is concerned it is a high-scoring venue and expect the numbers to go really high if the visitors’ bat first.

The Ireland team led by Gary Wilson will want to make a mark with this game. They aren’t the best of T20I sides at the moment and it can substantially change with their performance against India. Their line-up starts with the two experience campaigners Paul Stirling and William Porterfield. A lot on how well they do as a batting unit depends on the duo along with Andrew Balbirnie.

Bowling has been their better suit and the captain has to make sure his boys are all pumped up and charge at the famed Indian batting lineup. The likes of George Dockrell and Boyd Rankin have to take up the responsibility and surprise the Men in Blue who love to dominate their opponents with the bat.

India will open with two of the best white-ball batsmen at the moment Rohit Sharma and Shikhar Dhawan. On a decent batting wicket, if one of them manages to get going, Ireland will find themselves out of the game soon enough. Then there is Virat Kohli who is a man for all seasons. The likes of Dinesh Karthik, Suresh Raina, MS Dhoni and Hardik Pandya can all tonk the ball pretty big.

In the bowling department, they rely heavily on Jasprit Bumrah and Bhuvneshwar Kumar to deliver at the start and in the death but the best part about this team is the two wrist spinners. Kuldeep Yadav and Yuzvendra Chahal are a pair to watch out for on this tour.

The prediction is for Team India to quite comfortably win the match and take a 1-0 lead in the series. 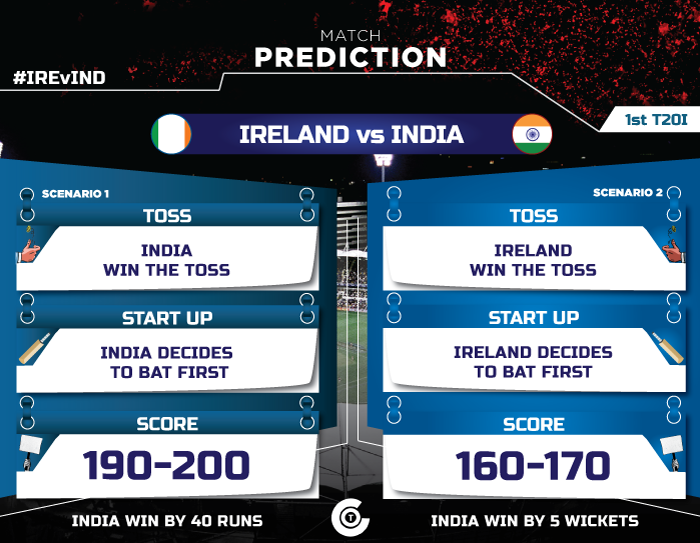