Ireland vs India 2nd T20I, 2018 – Match Prediction: Who will win the match India or Ireland?

Ireland vs India 2nd T20I, 2018 – Match Prediction: Who will win the match India or Ireland?

The Indian team leads the series 1-0.

The first Twenty20 International of the series last night panned out on expected lines as Team India was clearly dominant and a much better side. Gary Wilson asked them to bat first on a really sunny afternoon in Dublin. It was a true batting surface and the Indian openers enjoyed their time out in the middle. After the initial assault Ireland never quite recovered and despite Peter Chase’ brilliant last over where he dismissed three batsmen the score on the board was 208 runs.

Against an extremely experienced Indian bowling attack, no Irish batsman apart from James Shannon got going. The 28-year-old was attempting to hit every ball out of the park and was dropped twice but then made most of it to score his maiden T20I half century. Apart from him, no other batsman managed to make a substantial score and Ireland were never quite in the hunt for the target.

Not a lot will change overnight and the Irish team will have to play out of their skin to manage anything different.

With sun out, the Malahide cricket ground in Dublin provides a really good batting wicket. The ball comes onto the bat really well, there is no deviation, not even hint of lateral movement and the batsmen can just hit through the line. Another high-scoring game is on the cards unless of course, the weather changes substantially. With a batting line-up like the one India has it isn’t a bad idea to bat first irrespective of the past records on this small ground.

The Irish team doesn’t actually need to make changes in the line-up. What they do need to admit is they’re playing against a much superior side and the best practice is to go out there, give their best and not worry about the final outcome. They don’t just fall short in terms of skill but are way too inexperienced when compared to the Indians in this format of the game.

Wilson and the coaching staff should inspire the team to go out there and do the best with what they have. The likes of Paul Stirling, Kevin O’Brien and George Dockrell who have been around for a while need to put their hand up and give the team impetus with their individual brilliance.

Indian skipper Virat Kohli said that they want to use this series to try and give everyone who is a part of the touring party a chance to play. He also stated that only the top two will bat where they do and the rest of the middle-order will be shuffled based on the requirements. So the guys who played the first game, the likes of Suresh Raina, Shikhar Dhawan and both the pacers Bhuvneshwar Kumar and Jasprit Bumrah might be rested. Manish Pandey didn’t get to bat and could retain his place in the XI.

They have Dinesh Karthik, KL Rahul, Siddarth Kaul and Umesh Yadav who can fill in the spots. However, Team India not too often makes a whole lot of changes so it will be interesting to see if they still want to be conservative or give all the players’ match practice ahead of the England series where they will have to deploy the best resources against the Brits.

The prediction is for Team India to win the match authoritatively and take the T20I series 2-0. 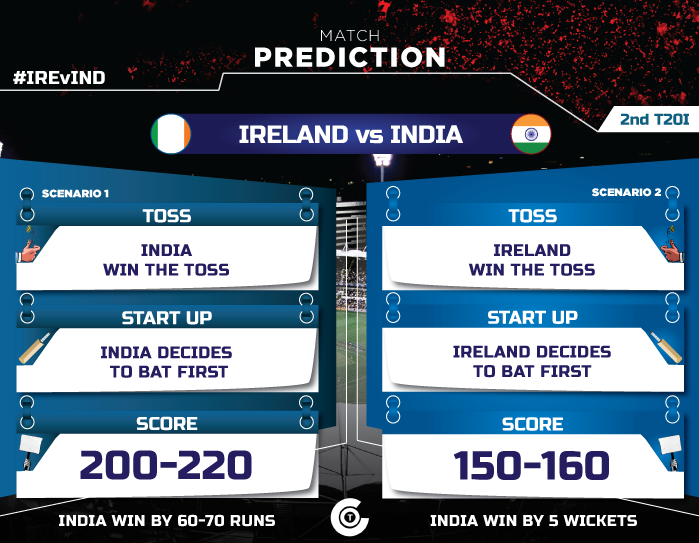