The two teams are yet to play a T20I against each other.

Ireland and South Africa are all set to take part in a three-match T20I series. The first game is scheduled to take place on Monday, July 19 at the Village in Dublin.

The three-match ODI series ended in a tie after the Proteas raced to a comprehensive win in the third game at the same venue. The Irish team put forth a spirited show after Simi Singh smashed his maiden ODI century, though it came in a losing cause.

The Proteas would also be high on confidence as they also beat the West Indies 3-2 in the away T20I series. The hosts, meanwhile, will be looking for a win against the odds.

The pitch in Dublin during the ODIs was a decent one for batting. The track isn’t expected to change in nature and a high-scoring game seems to be in store. The average score at the venue out of 13 T20Is isn’t on the lower side by any means. Ireland may want to bat first since they did well in both ODIs while doing so.

The two teams are yet to play a T20I against each other.

Quinton de Kock didn’t play the first two matches of the ODI series, but he showed his class in the final match. Though he didn’t get the Player of the Match award, he turned up with 120 runs off 91 balls with 11 fours and five sixes. The southpaw also played brilliantly in the West Indies T20Is as he was the leading run-scorer with three half-centuries.

Tabraiz Shamsi is currently in stupendous form in limited-overs cricket. He picked up three wickets in the last ODI. The left-arm wrist-spinner also became the Player of the Series in the West Indies T20Is. He picked up seven wickets and gave over 20 runs in his spell in only one of the matches. Shamsi will again be expected to deliver with the ball in hand. 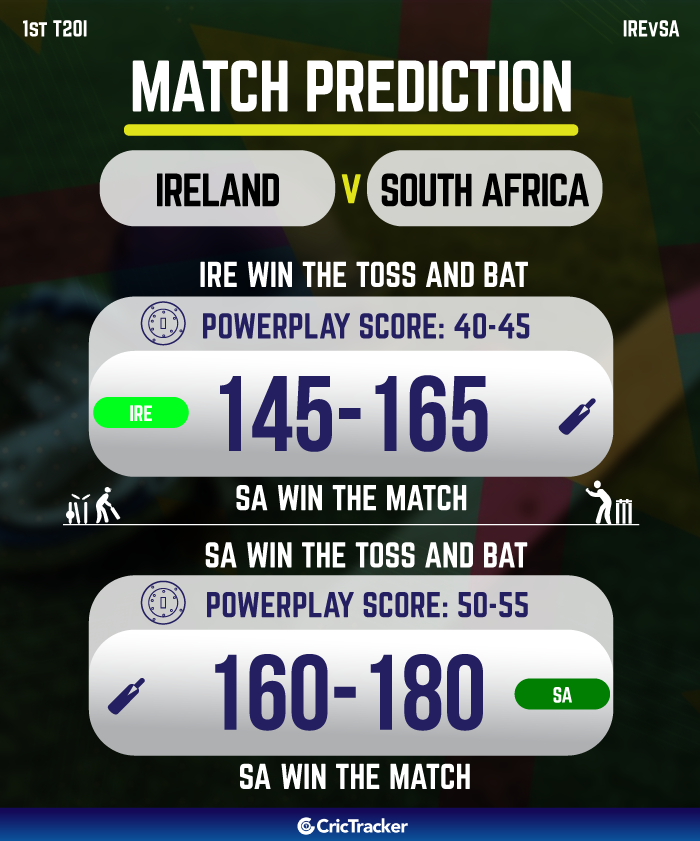