Is this the reason why MS Dhoni bowed out of international cricket at exact 7:29 PM IST?

Is this the reason why MS Dhoni bowed out of international cricket at exact 7:29 PM IST? 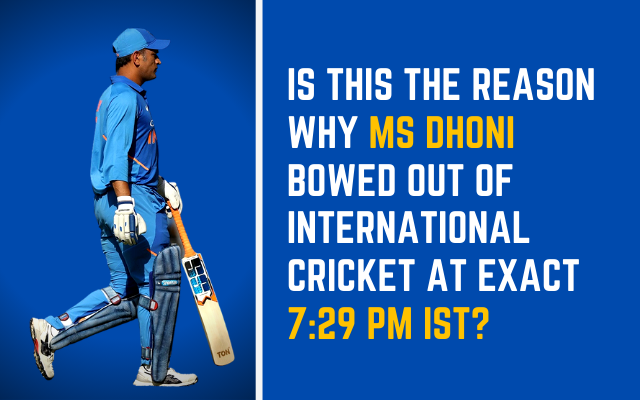 MS Dhoni, the man who contributed so much to Indian cricket and was admired by the world too, decided to walk away from international cricket quietly. Known for his unpredictable captaincy and mindset, the veteran caught everyone off guard on a chilling Saturday evening, like he did all his career while facing the opposition bowler. A glorious chapter ended on August 15, India’s 74th Independence Day.

“Thanks a lot for ur love and support throughout.from 1929 hrs consider me as Retired.” These were MS Dhoni’s words on his official Instagram handle. While the news stunned literally everyone, many were also left wondering the reason why he retired exactly at 7:29 PM IST.

Thanks a lot for ur love and support throughout.from 1929 hrs consider me as Retired

Was it any special occasion for him? Or it was some muhurta or something? While we delved a bit deep, we understood that team India got knocked out of the World Cup 2019 last year on July 9 at the exact time. MS Dhoni walked away from the field for the last time in the same match. Martin Guptill ran him out in the penultimate over of the innings to break a millions of hearts and the man, with a grim face, walked away.

After his wicket fell, it was pretty much curtains for the Men in Blue. With Yuzvendra Chahal losing his wicket in the final over, India bowed out of the mega event and the time was 7:29 PM in the country. Former New Zealand cricketer Grant Elliott tweeted the next second Chahal got out, making it the moment India were knocked out of the World Cup.

Interestingly, another reason is doing rounds on social media now thanks to a tweet from the CSK official handle. It mentioned that Dhoni retired from international cricket during the sunset at the southernmost tip of India. However, at the southernmost tip, sunset happened at 6:35 PM in India and as usual, not many are able to decipher the veteran cricketer’s mind as to why he retired at 7:29 PM.

MS Dhoni doesn’t like to hog much limelight. He retired from Test cricket in 2014 the same way and also stepped down from captaincy in the same manner in 2017. On August 15, it was no different as the man decided to put a full stop to his international career which spanned across more than 14 years.

However, he will continue to mesmerize the world with his batting and leadership in the Indian Premier League (IPL) while playing for the Chennai Super Kings (CSK). The fans will be eager to watch him make a comeback on the field once the IPL gets underway on September 19.