The Qalandars will be going into the final on the back to two thunderous victories under their belt.

The Pakistan Super League (PSL) is all set to witness a new winner. On Tuesday, November 17, Karachi Kings and the Lahore Qalandars would be locking horns at the National Stadium in Karachi to get their hands on the trophy.

Even as the Kings have made the made top four before, the Qalandars qualified for the playoffs after ending as the cellar dwellers ever since the first edition of the T20 tournament in 2016. In fact, in the Eliminator 1 and 2, they brushed off the Peshawar Zalmi and Multan Sultans with some jaw-dropping all-round show.

If the Qalandars turn over the Kings, it will be a comeback for the ages. The Kings, on the contrary, had a close shave against the Sultans in the Qualifier 1 after the game went into the Super Over. But Mohammad Amir and Sherfane Rutherford held their nerve to script glory.

The pitch in Karachi has been an excellent one for batting. Bowling becomes even harder when the dew settles in during the second half of a game. Hence, fielding first should be the way forward for both the teams.

Another high-scoring match can be expected in the final. The temperature will be nice and cool with the numbers around the 24 degrees Celsius mark. The humidity will mostly in the high 40s.

Playing Combinations for KAR vs LAH

Irrespective of tournament or format he has played in recent times, Babar Azam has been unstoppable, to say the least. He is the leading run-scorer of the ongoing edition with 410 runs at an average of 51.25.

Even in the previous game against the Sultans, he came up with a handy 53-ball 65. His knock was laced with five fours and two sixes. The 26-year-old from Lahore will be looking for a match-winning knock.

Shaheen Shah Afridi has arguably been the standout bowler in the ongoing edition of the PSL. The left-arm fast bowler has 17 wickets to show for his efforts. He was among the wickets in the playoffs and was a primary reason behind the Qalandars’ dominance thus far.

In the final, Lahore’s fate would depend a lot on how the young fast bowler bowls in the powerplay and in the death overs.

KAR vs LAH Head to Head

The prediction is for Lahore Qalandars to win the match. 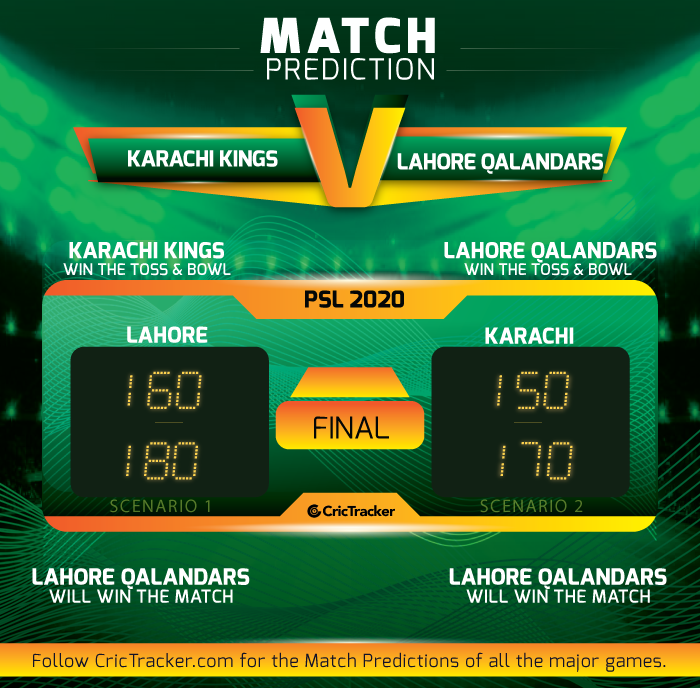