The likes of Chris Gayle and Nicholas Pooran will be up against Rajasthan's leg-spinners.

After getting the desired result from the Thursday’s match, the Kings XI Punjab and Rajasthan Royals face off in an important match ahead of the playoffs in the 2020 Indian Premier League (IPL). A defeat in this fixture will mean Rajasthan joins CSK among the teams to be out of playoff race. However, if the Royals manages to get two points from this fixture, the KKR and SRH teams will also get benefited in the due course.

Schedule logistics around KXIP vs RR

Only one transfer for KXIP and RR each has been used by us as the two teams will be in action again on Sunday. Since CSK and KKR will be playing their last on Sunday, we have excluded their players for using transfers. CSK players can be removed from the fantasy as we are not sure who will be in their playing XI during the next match.

Will KXIP’s batters succeed in KXIP vs RR?

Rajasthan Royals could well have a tough time against the Kings XI Punjab’s batters if not Jofra Archer doesn’t step up. With the likes of Chris Gayle and Nicholas Pooran in the middle order, the Rajasthan leg-spinners could go far over the boundary and force Smith to bowl Ben Stokes and Riyan Parag making it a bigger disaster for the Royals.

Jofra Archer is a straight forward option to bring into the fantasy given his all-round performances through the tournament. Another transfer can be used for bringing in an Indian batter of 8 or fewer credits. After last match’s fifty, Mandeep Singh might continue opening the batting for KXIP. If he doesn’t play, bring in Devdutt Padikkal keeping an eye on the Saturday’s fixture. 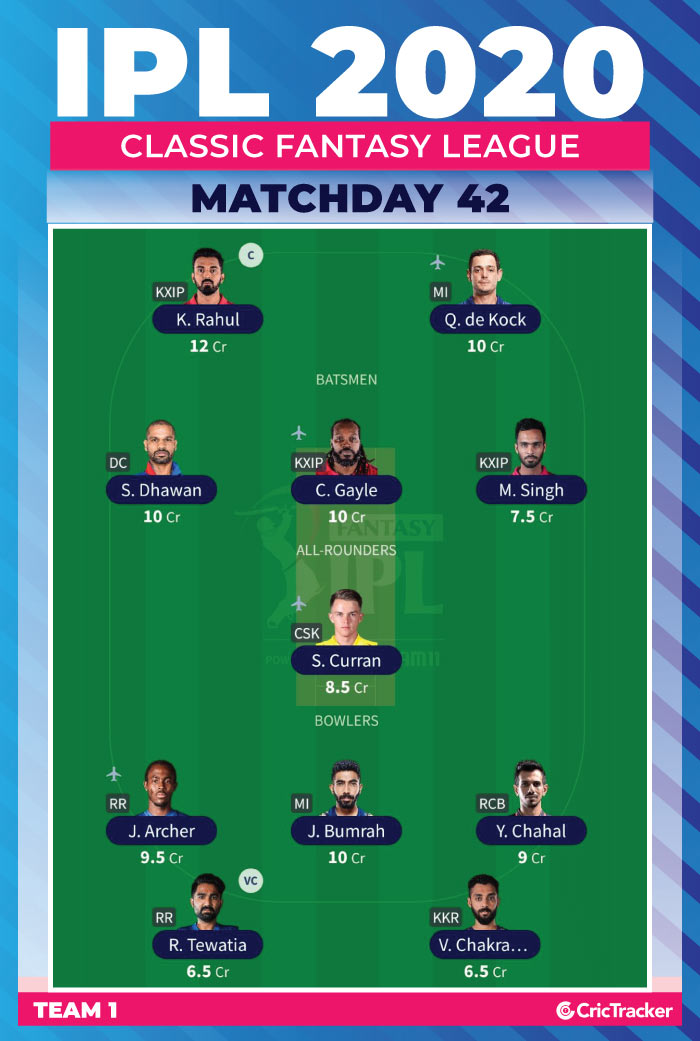 To rope in Nicholas Pooran, we have brought in Axar Patel who will be in action on Saturday. We had to exclude Ambati Rayudu and Sam Curran for making these two transfers. Jofra Archer has been brought in for Sunil Narine and has been made skipper due to his consistency throughout the tournament.